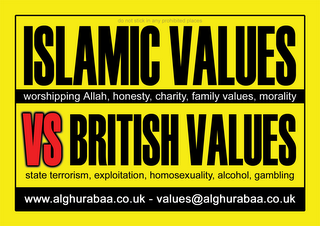 From the Ilford Recorder :

"POLICE are investigating the source behind dozens of controversial stickers put up around Ilford Town Centre, just days before the first anniversary of the London bombings.

Bright yellow stickers that read: "Islamic Values Vs British Values" contrasting honesty and charity for Muslims to gambling and homosexuality in Britain have appeared on lampposts, bus stops, phone boxes and road signs in the past week.

Redbridge Racial Equality Council alerted police, amid fears they could provoke tensions in the run-up to the July 7 anniversary tomorrow (Friday).

Extremist Islamic group Al-Ghurabaa produced the stickers, but a spokesman claimed he did not know who put them up."

Their website has the tasteful heading : "Are we ready for another 7/7 ?". Who's we, paleface ?

That 'are we ready' reminds me of something.

take a stiff drink before reading this

Read the first 3 paragraphs and could work out the rest myself...

Yes it does staghounds - it exposes the painful truth that moderate Islam is a chimera and that the true face of Islam is anything but peaceful and is in fact a vicious, suprematist cult as succinctly shown by the Al Gurabs. Throw them out of the country or imprison them for sedition.