John Derbyshire interviewed at the Economist's Democracy In America blog :

Mr Derbyshire: Abandonment of "nation-building" exercises. Abolition of the federal Department of Education. A 1924-style immigration freeze. Repeal of No Child Left Behind. End of all federal subsidies to "community groups". End of all federal subsidies to arts and culture. End of all foreign-aid programmes that are not plainly and obviously bribes for pro-American behaviour. Restart construction of neutron bombs. Full-bore federal-subsidised research on missile defense. Withdrawal from the UN, followed by razing of all UN structures on American soil and sowing the ground with salt. How many d'you want?

DIA: The candidate button on the cover of your book doesn't exactly look like a political winner. Do you think conservative pessimism can be sold to American voters? Do you see any candidates out there who might take up the cause?

Mr Derbyshire: No. No.

William Gazy - who I don't think is a conservative by temperament - is not much less pessimistic - an outlook possibly triggered by this : 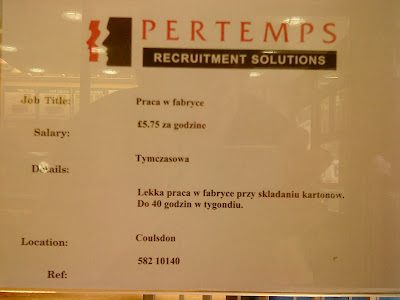 "I liked that advert because it showed that wages for that sort of job have risen about 75 pence in 14 years. I know, because I used to do jobs like that and by the looks of things will soon be doing them again."

But is that a gleam of light on the horizon ?

A Harman government would compound the errors of the Brown/Blair years while bringing fresh stupidity to the table: She could fully bankrupt the country very quickly and bring Labour’s many hatreds and neuroses to the boil in a trice. There would be a vast new drive to go much further in implementing the policies that have made everyone hate Labour; the public sector would become a sort of Marxoid gynarchy; ‘misogyny’would be ‘stamped out’; billions of borrowed money ploughed into ‘equality’; the current underhand Labour policy of underfunding the armed services and diluting them into a ‘European Army’ would be stepped up, despite the country being at war; Labour’s policy of EU and non-EU mass immigration would be fiercely encouraged; the lobotomy of schools and education would gather greater pace; the monarchy would be closer to abolition than at any time for centuries; the police emasculation will continue apace; violent disorder and organised drug addiction will grow. As now, there will be no money but borrowed money. Taxes will soar. The journey to third world status and third world services, begun under Blair and Brown will be properly under way and steaming ahead all engines firing. The sins of the empire will be atoned for – the wet dream of every Labour ideologue – and England will be smothered. Except for the wealthy, civilised life will be a dim memory. Like now but more so, sirens, hip-hop and the Muslim call to prayer will be the soundtrack to urban living. Recycling will be encouraged at all spare moments, rather like the way that under Mao’s cultural revolution every person with a few minutes spare time had to work at digging a hole in their back yard.
For the sane man the only response will be alcohol abuse or revolt. One can almost believe that civil war would occur, and that, plus revolution, is just what this old country needs.

Alas, such optimistic visions are soon dampened as reality dawns :

"Of course, we won’t get a Harman government, we’ll get a Cameron one; and the minute that expenses-fiddling individual sets foot on the Downing Street doormat all the forces of the liberal left, so long quiet about this country’s problems and economic woes, will start shouting and carrying on as if there hadn’t been a Labour government for 13 years. The Specials will probably re-release Ghost Town..."

Have a nice day !
Posted by Laban at 8:05 am
Labels: the way we live now, UK politics

For what possible target?

I think I probably agree with much in his book but it's hard for conservatives to be, at least in public, realistic and accepting of "facts" which in today's day and age are outside the bounds of legitimate debate. Even to obliquely raise them will mark one as a pariah. I suspect most of his arguments will be branded 'hate' and shut down.

As far as Cameron goes - here's a question: has he ever said anything in a public speech or announced any view that couldn't have been said by Tony Blair?

For what possible target?

Derbyshire's 'conservative pessimism' seems to be a natural extension of his 'Hypothesis of Collective Imprudence' (HCI), which states that "no large collectivity of human beings (nation-state or larger) will ever act to avert an obvious calamity until that calamity begins to cause really major, dramatic, unignorable damage."

Relating his HCI to the 'obvious calamity' of large scale third world immigration into England and other European nations,is not a pretty prospect. It suggests that the situation has to get worse before it can start to be put right.