A chap beats his lover to death when she decides not to leave her husband for him.

Manslaughter, obviously. No reasonable person could have supposed that smacking a woman round the head with a wooden mallet was likely to kill her, could they now ?

"He was released on licence from his seven-year sentence in October 2004."


Let's move on to a the Carter family - the British one. Mum has a daughter of 16 - or maybe 15. I'm not sure I'd want my young daughter to be 'seeing' someone of 31 - let alone a guy with a track record like that.

Ah well. Pity about the kids. The little girl's freckled nose and clear gaze remind me of my darling. Poor child. How could anyone ? 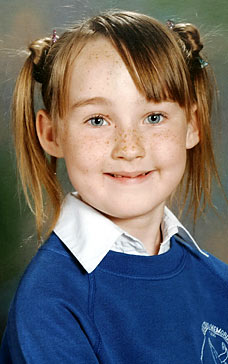 On the evening of March 9 he allegedly rode his motorbike from his mother's bedsit in Leek where he was staying to nearby Cheddleton with a holdall containing at least one can of petrol, a tealight and a cigarette lighter.

The trial at Stafford Crown Court was told that Goldstraw probably let himself in at about 11.30pm, spread petrol around the hallway and set the fire.

The resulting petrol vapour explosion woke the neighbours, one of whom heard Marcus's chilling screams through their shared wall, and some rushed outside to see his sister Patricia trapped in the front bedroom.

But the intensity of the blaze that followed meant no-one could be saved - fire officers said it was the worst they had ever seen.

Meanwhile Goldstraw is alleged to have run from the scene to the pub where he had concealed his motorbike, ridden back to the home of his mother, Lucia, and taken a shower.

He was arrested the following morning but refused to comment on his whereabouts the previous evening.

Police found his fleece, jeans and trainers in a wheelie-bin outside his mother's home, Mr Hotten said. They smelt strongly of petrol and bore scorch marks.

A teddy bear, necklace, pair of earrings and watch identified by Mrs Carter as belonging to Samantha were found in his leather jacket, he added.

And a holdall found discarded close to the scene of the fire contained petrol residues and fibres matching Goldstraw's fleece.

In addition, the jury were told that a witness who saw a man running from the blaze had identified him as Goldstraw.

Mr Hotten said Goldstraw had been convicted of manslaughter in 2001 for battering his lover Deborah Wheatley to death with a mallet after she said she would not leave her husband for him.

He was released on licence from his seven-year sentence in October 2004.

While this might be "an unfortunate coincidence", he said, it could explain "why this man, of all men, would react with murderous violence when others would not have done".

Goldstraw is charged with four counts of murder, all of which he denies. He later claimed he was riding his bike around Leek at the time of the fire.
Posted by Laban at 10:08 pm

This way to the gallows Mr Goldstraw, no dawdling, theres a good chap.

Total madness, our country has collapsed.

You're right Dave...but what are we going to do about it?

Let's hope the grieving parent doesn't have the temerity to say (when this guy is eventually dealt with) 'I'm the one with a life sentence....' or Bystander will be cross....

Can't we start a fund, to put out contracts on low lifes like this.

Serf - Oh, I like that idea! It's creative and pragmatic. As blair has effectively decommissioned our entire legal system, the time for citizen's law approaches.

I think your idea is workable.

just curious - would the grieving parent have a case in law for sueing the judge (or sueing the government) that originally gave this bastard 7 years?

somebody HAS to do something.

I think it's the white-male-centric policies of locking the poor man up that caused him to do this.

Actually, I think his next stay in prison could be very interesting indeed if the other inmates were to regard him as a nonce.

<moonbat>
People like this need love and understanding. They are alienated from society.
</moonbat>

Hey they work. You should claim a patent.

Here I make my regular call for the introduction of the industrial shredder as a means of execution. Saddam supposedly favoured this but I remember (I think) seeing it in Maniac Cop:

A nice touch would be to have large posters of Patricia looking down on this turd as he is (very) slowly lowered in.

Its a comforting thought.

If this piece of filth had hanged for murder the first time those kids would be alive today. But hey who am I, just a 'barbaric' death penalty advocate.

I hope those kids screams haunt the dreams of every piece of filth who has ever said that prison doesnt work or that the death penalty is 'inhumane'.

"I hope those kids screams haunt the dreams of every piece of filth who has ever said that prison doesnt work or that the death penalty is 'inhumane'."

An extremely unlikely hope. Lefty politics is all about taking zero responsibility for the death, damage & murder they cause.

One of the interesting features of chaotic lifestyles is the rising trend in Personality Disorders of such types that cannot be treated.

Since they cannot be treated they are released from secure mental units.

The problem is that once you let the structures in society collapse you get the "tumbleweeds" who know no structures, have no boundaries, and who flip out at the slightest provocation...........we have a society obsessed with "repression" but overwhelmed by people "acting out" and not subject to control.