It stated: "In the last 12 months, the GPA has recorded a 74% increase in homophobic incidents, where the sole or primary motivating factor was the religious belief of the perpetrator." 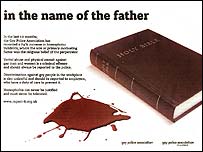 At the time I noted that the GPA website didn't seem to have the detailed figures. Surprise surprise, they couldn't provide any to the ASA either. I thought the police weren't supposed to make things up - isn't that a criminal offence ?

The GPA ad was deemed to have breached the code in terms of decency, truthfulness and substantiation.

The Gay Police Association (GPA) said the ad was devised to coincide with the 2006 Euro-Pride event and was intended to highlight the reporting of homophobic hate crime, in particular, incidents where religion was given as justification for an offence. They said their helpline had received almost 250 calls related to homophobic incidents between April 2005 and March 2006, a 74% increase on the previous year. These included general enquiries, requests for assistance and allegations of discrimination in the workplace.

They said the ad was designed to be thought-provoking and challenging. They accepted that the imagery and headline used were primarily Christian, but argued that accompanying text made clear the issues referred to were not exclusive to Christianity. They said it was never their intention to castigate and describe all followers of religion as homophobic. They pointed out, however, that most of the incidents they recorded were weighted against Christianity, while approximately one-quarter referred to Islam and the Muslim faith.

Muslims make up 2% of Britain’s population, but are responsible for 25% of the anti-gay hate crimes. And a British gay advocacy group is trying to conceal this, by focusing attention on Christians.