The problems began in late May when the company had reached about 9,000 feet, Mr. Widodo said. It continued to drill to this depth even though it had not installed what is known as a casing around the well to the levels required under Indonesian mining regulations, and good mining practices, he said.

The company experienced problems with the drilling that led to a loss of pressure in the well. That is when the mud started seeping in from the sides of the unprotected well bore, at a depth of about 6,000 feet.

The mud was stopped by cement plugs that the company had inserted into the well hole. The mud then sought other avenues of escape, eventually breaking through the earth, and creating mud volcanoes in several places that resemble the geysers of Yellowstone. 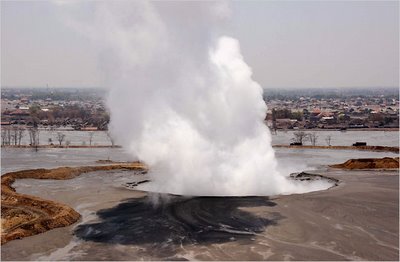 Eight villages are completely or partly submerged, with homes and more than 20 factories buried to the rooftops. Some 13,000 people have been evacuated. The four-lane highway west of here has been cut in two, as has the rail line, dealing a serious blow to the economy of this region in East Java, an area vital to the country’s economy. The muck has already inundated an area covering one and a half square miles.

And it shows no signs of stopping.

The mud is rising by the hour, and now spewing forth at the rate of about 170,000 cubic yards a day, or about enough to cover Central Park.

It turns out the company responsible is owned by one of Indonesia's richest men, a cabinet minister who is a friend of, and major campaign donor to, President Susilo Bambang Yudhoyono.

The company's been sold. For £2. To a Jersey-based company, Lyte Ltd, also owned by said billionaire, Aburizal Bakrie, and his family.

Spokesman Herwin Hidayat said the Bakrie Group remained committed to cleaning up the mud, through Lyte. He declined to say what assets Lyte had, if any. He said it was a “functioning company.” He declined to give any examples of any business that it had done.

A concern now is whether Lyte, which has been renamed Bakrie Oil & Gas, will declare bankruptcy, which seems almost inevitable.

“That’s what I’m afraid of,” said Mr. Hendrarso, the senior elected executive official in Sidoarjo, the district that is at the center of the mud disaster. If the Bakrie Group does not pay, the Indonesia government will be left with the bill, government officials said.

Lovely place, Jersey. When the tide goes out the stink of money is almost unbearable.
Posted by Laban at 9:24 pm