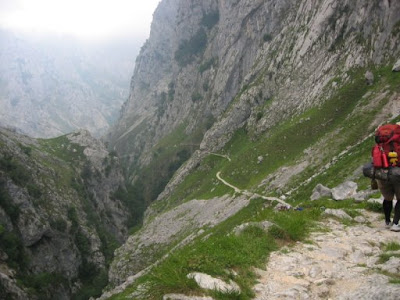 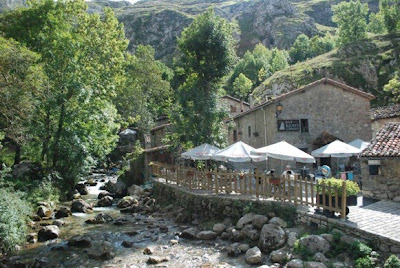 After a walk like ours, to sit under a sunshade and sip a chilled beer feels very good. And the descent is a great improvement on the ascent - even the heat's less, with the ravine now in shadow. Lovely place - I can see why people rave about the Picos de Europa. Will come again.
Posted by Laban at 9:54 pm
Labels: Spain

That little bar would be a very welcome sight after that experience!

Those are the kinds of mountains I like, ones with bars on top of them and roads or railways up. See also Snowdon, the Sierra Nevada near Granada and one in Switzerland with a view of the Matterhorn.

The trouble with our Snowdonian equivalent is that it's like a motorway service station without the perks. It stunk worse than me walking boots.

Laban-you certainly deserved your chilled beer after a hair-raising walk like that !

So... Good holiday then.

The difference twixt that and Snowdon is that there's another 4,000 feet to the top peaks. Bulnes is on a little plateau surrounded by yet larger mountains. Still a bit of snow on the north face of the highest we could see.

Nothing like threat of death to make you feel alive

Scary, but what a sense of achievement you must have felt to have made it in one piece. You definitely deserved that cold beer!