Signs Of The Times

Street adverts featuring women in bikinis have been defaced in apparently targeted attacks. Most show women in swimwear by chain store H&M but another features a couple kissing to promote the Bollywood film Kites. Residents in affected London areas suggested the images, which were daubed with black paint, could have been targeted by religious conservatives or radical feminists. Police have not linked the campaign to any religious group but the damage is similar to attacks in Pakistan on billboard ads branded "un-Islamic" and "obscene" by hardliners. Today women's rights and anti-censorship activists joined Muslims and Christians to condemn the vandals. Police said 14 bus shelters around Tower Hamlets, including many in Limehouse, were hit last month.

Tower Hamlets is a hotbed of radical feminism, I hear. 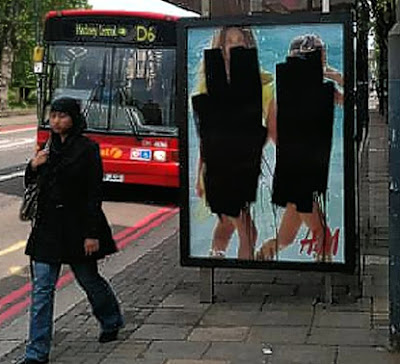