I saw this story reported somewhere late last night and assumed it was a joke. Apparently not.

Investigators have discovered a "Jihadi village" of white German al-Qaeda insurgents, including Muslim converts, in Pakistan's tribal areas close to the Afghan border. The village, in Taliban-controlled Waziristan, is run by the notorious al-Qaeda-affiliated Islamic Movement of Uzbekistan, which plots raids on Nato forces in Afghanistan.

A recruitment video presents life in the village as a desirable lifestyle choice with schools, hospitals, pharmacies and day care centres, all at a safe distance from the front. In the video, the presenter, "Abu Adam", the public face of the group in Germany, points his finger and asks: "Doesn't it appeal to you? We warmly invite you to join us!"

According to German foreign ministry officials a growing number of German families, many of North African descent, have taken up the offer and travelled to Waziristan where supporters say converts make up some of the insurgents' most dedicated fighters.

And they picked up a few more on their way there :

Pakistan has jailed six Germans, including a four-year-old girl, on suspicion of trying to join an extremist group, after arresting them on the Iranian border in May, according to the weekly Der Spiegel. They reportedly include the brother-in-law of Munir Shuka, spokesman for the Islamic Movement of Uzbekistan (IMU), a militant group with ties to Al-Qaeda that is often cited as a top security concern by governments in ex-Soviet Central Asia. Also held are a German converted to Islam and his wife of Eritrean origin along with their four-year-old daughter, according to Der Spiegel in a report to appear Monday. The six were said to have claimed to be Turkish and to have lost their papers, and it was not until August, when Pakistani intelligence took over the case, that their identity was revealed.

I'm sure we're all relieved that the four year old is no longer a danger.

According to Sveriges Television (SVT), it was Ghezali, along with two other Swedes and several other foreigners, who was arrested by police in Pakistan on suspicions the group had ties with the Al-Qaeda terrorist network. “We confiscated a laptop and $10,000 they had with them,” said a spokesperson for the Pakistani military, according to the Expressen newspaper. The arrests took place at a checkpoint in Dera Ghazi Khan in Punjab province, when the group was reportedly on its way to southern Waziristan.

I must say I'd never heard of Bekkay Harrach, aka Abu Talha al-Almani (the German), but he's apparently the hot new kid on the Al Quaeda block - and he's bringing a whole new style to the tired old jihadist video - you know, the formulaic flag, readings by black-clad chaps, beheadings stuff that is so 2004.

The latest video by Harrach is most striking because its themes and packaging are targeted almost exclusively for a Western audience. Speaking softly in fluent German, without the usual militant or religious props featured in past al Qaeda messages, he stares directly into the camera and only occasionally looks down to turn over the pages of his speech. He never wags his finger or raises his voice. The video carries no subtitling in Arabic.

He's the jihadist we can all relate to - with a real emo look that's bound to appeal to the vitally important suicidal fifteen-year-old demographic. 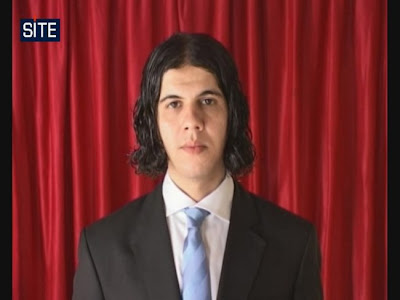 He's got a neat line in dry humour, too :

"He reminded viewers of the attacks in Madrid and London and, addressing the German chancellor, asked "Lady Merkel, what is the logical outcome earned by British Conservatives and the Spaniards for their support for the Iraq war? Why is Germany involved in the war on Afghanistan? The Afghan people did nothing to the German people and the Mujahideen have not done anything to the German people... God commands us in the Qur'an - Al-Anfal, verse sixty - that we must do what we can to force our enemy to surrender," he stated. "But if the enemy can find a peaceful solution... the Holy Qur'an commands us to forgive." According to his statement, Germany's only option to avoid an attack is to withdraw its forces from Afghanistan.

If Germany does so, he said, al Qaeda will withdraw from Germany. "This is a promise from al Qaeda. This is the tolerant Islam that the West knows well and praises so much."

A German convert to Islam pleaded innocent on Monday when he and Al Qaeda’s 9/11 mastermind Khalid Sheikh Mohammed were put on trial for plotting a bloody 2002 suicide bombing of a Tunisian synagogue. “Every time innocents die, that touches me deeply,” insisted Christian Ganczarski when he appeared in a Parisian anti-terrorism court to face a charge that he and Sheikh Mohammed planned the attack which left 21 dead.

Hmm. You can never tell with stuff on the Web, but this says different.
Posted by Laban at 7:28 pm

Tragic really. Germans have many good qualities, but such a terrible, terrible, dark side.

Anyway, these particular Germans are no different from the 'tards who stuck their hands in the air and shouted "Heil Hitler" all those years ago.

Approached earlier on a bus by an impressively robed bloke with an amazing leather hat like an outsize biretta, a sort of stole, tassels, beads and dangling strips of embroidery, and carrying a large book and a long staff - a truly hieratic figure.
I'm white, so a Rastafarian priest wasn't going to talk to me: perhaps he was an Ethiopian Christian, and I know I'd find an interview with such a man of absorbing interest. "Wisdom is not learnt in a college my friend", he observed, to which I assented in general terms."May we talk?" he continued - again, I beamed. He asked me where I lived, and a little warning bell rang in my mind.
"What are you hoping to convert me to?" I asked. "Nothing my friend: I am not going to convert you" he said mildly. "May I see your book?" said I and he displayed the front cover - 'The Glorious Qu'ran'.
Oh dear, I began the usual rant.I can't tell you what I said as it was, according to my wife, all highly actionable, but I'd NEVER have referred to this man as "British", no matter how many documents and passports he might have been given.
I can't quite make out from the articles whether all the Germansinvolved were genuine Nordics or Teutons or whatever. But whenever I read an account which includes the words "The Briton involved was named as Abu ben Khazi" all i can do is spit and bubble with rage.

Is that Nick Tora Bora Cave ?