When I came back from Lyonnesse 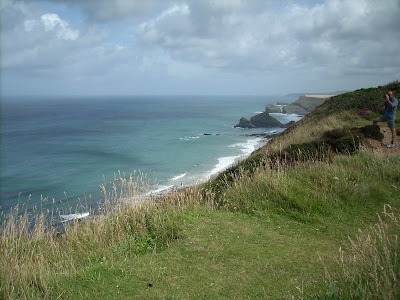 I must say the surf on the north coast of Cornwall is terrific. Definitely beats Gower, much as I love the place. You can stand up to your waist, only 20 yards out, and they'll come in breaking well over your head - sometimes a struggle to stand up to them. "Exuberating" as my daughter rightly said. Great for kids learning to surf or bodyboard - and the sea's warm enough that an aged father, t-shirted (the sunburn!) but not wetsuited, can spend three hours at a stretch in the water. You can hire a board for the day for a fiver. We respect such a sea, though - we're there when the tide's coming in and stick to the lifeguard zone. The board, soft-edged though it be, doesn't half hurt if it hits you on the head - I think it could probably knock you unconscious if you were unlucky. So when the RNLI pack up and go home, so do we.

Not far up the coast at Newquay, young men were dropping off the cliffs right left and centre - the town consisting of an excellent surfing beach surrounded by vertical cliffs - said cliffs topped by dozens of vertical drinking establishments. For some reason I can't fathom, they all seem to fall off in the early hours. My middle son, now seventeen, is off there tomorrow with three friends - and over the last week his father has been reading the casualty toll each day to him... inshallah something will sink in - although fiftysomething fathers can get into trouble there too.

We were in the water every day, but still found time for a few excursions - mostly ending in food and drink. Despite all that swimming and boarding, I've put on five pounds !

If you remember, Devon and Cornwall were the top locations for Brits fleeing West 'to escape the frantic lifestyle' (before West Wales became 'the new Cornwall') - and the place is indeed 'unhealthily white' - although still multicultural, the cultures ranging from upper-middle (plenty of RP blondes manning the surf schools - don't get me started on St Ives) through tattooed Cockneys in Merc 4x4s (with obligatory disabled parking badge) barking into their mobiles, to the Scally teenagers in the gift shop holding the pink illuminated squiggler to their trousers and roaring with laughter.

In fact you can drive for three hours up the A39 and quite forget what the rest of the UK is like - which brings me to the conversation we had with the lady who came to clean up before the next people took our house. Retired, but still hale and hearty, she'd lived there for nearly 20 years since leaving Sparkbrook - once a bit of Brummagem with a pronounced Irish tinge, now almost wholly Asian (update - I'm behind the times). Her husband was from Small Heath - an area even more completely transformed.

Which transformation, inshallah, will be the subject of tomorrow's post.

Back to the A39. The A30 yesterday was down to a crawl as the first holiday week's visitors headed out, so we took minor roads then headed through Camelford along the 'Atlantic Highway'. Fifteen miles up a small sign for St Juliot caused me to hit the brakes and swing sharp left in pilgrim mode, down a steep, tiny road, across a ford and up a hill to a romantic setting which in Victorian times must have been remote indeed. It took a whole day, rising at four, to get there from just outside Dorchester. 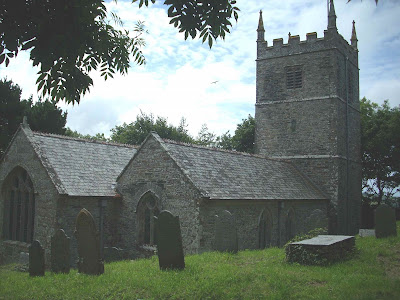 For here it was that a young architect and aspiring writer called Thomas Hardy came in 1870 to draw up plans for the restoration of the church, then in a state of near-collapse. On arrival at the rectory (now a posh B&B) he found the vicar indisposed with an attack of gout, and was greeted by 'a lady in brown' - the vicar's sister-in-law, Emma Lavinia Gifford, and Hardy's wife-to-be. 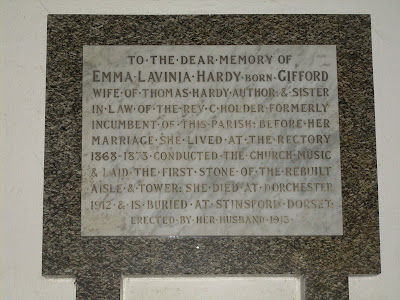 I don't think it was in the end the happiest of marriages. Emma, who was marrying down, was a middle-class catch for an artisan's son - but within a few years she found her husband a celebrity, feted by all manner of aristocratic totty - something to which he was apparently not averse. Alas !

Your eyes on me were as eyes that rove
Over tedious riddles solved years ago;
And some words played between us to and fro -
On which lost the more by our love.

The smile on your mouth was the deadest thing
Alive enough to have strength to die;
And a grin of bitterness swept thereby
Like an ominous bird a-wing….

Well, I'd dragged Susan and the children to St Juliot, the kids were hungry and we'd promised a cream tea before we left - and Boscastle was just down the road - another romantic place. A tiny village in a narrow valley (which floods), with an even tinier harbour hidden from the sea by a zig-zag of cliff. 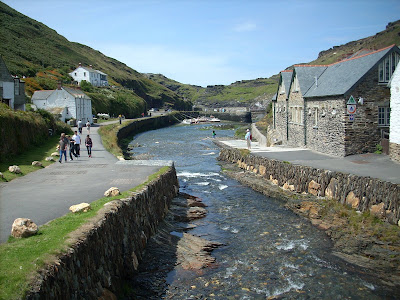 A neat if slow road, the A39. The section outside Lynmouth (which floods), up Countisbury Hill, is as spectacular as California's Highway 1 up to Big Sur.
Posted by Laban at 7:15 pm
Labels: history

My family come from Bethnal Green. We are white. We departed for Canada, USA, Australia and France. Now, Bethnal Green is full of Asians. Know what? They can have it: I've seen it many times and they can have it. No resentment whatsoever. The old bag should count her blessings she doesn't have to live in inner city UK. It's a cesspit and if a bunch of asians want to live in a British slum rather than an Indian slum, then let slumdogs lie.

Canada, USA, Australia and France - all safe of course, they wont be turned to slums or overrun with Asians because...

So whatever happened to interculturalism? It is hideous though, what I found desperately upsetting last year was the sight of a burkha in Shipston-on-Stour - fortunately it was a one off, and I could comfort myself that it was an illusion, though I would be deluding myself upon that score.

Ultimately it will come down to control of the countryside.

I was only thinking the other day that Hardy could not have written in an Islamic context, not that they seem to write much anyway.

Tess, most of the village girls from Trantridge apparently

I just moved from Liverpool to the Wirral...it was like stepping back 40 years and life has become easier as I see less of the third world that our inner cities have turned into.

I learned to belly board in Newquay. It was a two day drive for us in the 50s. I suspect my parents were keen to get somewhere where there weren't many Glaswegians.

So Saltcoats was out, then ?

Where are you from dearime - Edinburgh?

Welcome back, Laban. Glad to see you a good holiday.

"I suspect my parents were keen to get somewhere where there weren't many Glaswegians." -

How do you know dearime is called Bill?

I rather enjoyed "Desperate Romantics" on BBC2 last night

And consequently I feel impelled to see the relevant works of art in Birmingham Art Gallery again, after too long a gap- trying to ignore the third world hordes from New St station on of course.

They would have stoned Lizzie Siddal as well naturally, so fortunate we were unenriched at the time.

Whenever I venture into the ex-City of 1000 trades - now Mirpur/Mogadsishu work in "progress" I always need to go to the Wellington, just off New St - 14 handpumps; quite superb - non-commercial, you can bring in your own grub and they provide the plates and the cutlery.

Of course the dear old Wellie is deeply haram too, like most of our stuff - whilst according to lib/commie mongs the backward enricher obscurantism positively exudes culture. I wish I had a tenner for every time I have seen some retard comment that there is no such thing as British culture

That last place is Boscastle - a beautiful place and wall-to-wall full of my fellow tree-huggers.
And some petty interesting Christians, too - and the Witches Museum is a must.

I have to say the body boarding in some of the south coast's smaller bays is special too, but I envy the hell out of you this past week.

I recently visited Small Heath and I was so shocked it has become what can only be described as a dump...
What makes me so concerned is that there is hardly and english written on the shops fronts I felt like I was visiting another country...have we become so multicultural that we have forgotten our own culture, or abandoned it in respect of others who do not respect us or our heritage?

A good blog always comes-up with new and exciting information and while reading I have feel that this blog is really have all those quality that qualify a blog to be a good one.
| latest bridal wear in pakistan | wedding dresses | pakistani bridal dresses | boutiques in pakistan | Pakistan fashion | boutiques in lahore |