Now That's What I Call A Vespa

Did the Mods of the 60s and their pale imitators of the 80s know about this ?

The AMCA Troupes Aeról Portées Mle. 56 is a M20 75 mm recoilless rifle mounted on an Italian Vespa scooter used by the French Airborne Forces in Algeria and Indochina. Produced by ACMA, a licensed assembler of Vespas in France, it mounted an M20, a U.S.-made light anti-armor cannon which could be fired from the shoulder but still penetrate armour 100 mm thick. The recoil is counteracted by venting propellant gases out the rear of the weapon which eliminated the need for a mechanical recoil system or heavy mounts, which enabled the weapon to be fired within the Vespa frame. The weapon, ammo (attached to the side) and crew were dropped via parachute into action and the weapon could even be fired on the move. 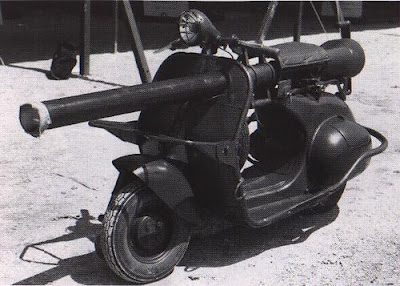 I'm impressed. Any weaponry mounted on a BSA or Matchless of the period would have been subject to the frequent maintenance needs of the bike. A mean machine indeed. But the French ended by leaving both Indochina and Algeria.
Posted by Laban at 10:20 pm
Labels: big boys toys, history, patriarchy

Crotch itch would be the least of your problems...I rather fancied myself on those tasty looking Nazi motos with sidecars...they always looked so unstable though and I was proved right by The Great Escape.

Re: A people who've lost their land...ooh sir, very naughty of you sir...brought an ironic tear to the eye.

In my youth some friends used to ride the Russian clones of those BMW bikes (they nicked the jigs after WW2) - the dreaded Cossack Dneiper and Ural (aka Urinal), complete with sidecar.