Remember when Gordon Brown started wrapping himself in the Union Flag ?

Looks like implementation time is upon us. A correspondent tells me that this is being rolled out to Year 7s - as part of English, would you believe. 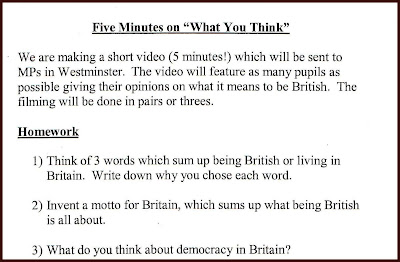 Being British means not talking about it, oh foolish ones. Or, as Prospect Magazine's contributors put it in relation to "British values", when you've got them you don't need to list them, and if you need to list them then you no longer have them.

To quote a great Indian writer :

Their years forbade them even to shape their thoughts clearly to themselves. They felt savagely that they were being outraged by a fat man who considered marbles a game.

And so he worked towards his peroration--which, by the way, he used later with overwhelming success at a meeting of electors--while they sat, flushed and uneasy, in sour disgust. After many, many words, he reached for the cloth-wrapped stick and thrust one hand in his bosom. This--this was the concrete symbol of their land--worthy of all honour and reverence! Let no boy look on this flag who did not purpose to worthily add to its imperishable lustre. He shook it before them--a
large calico Union Jack, staring in all three colors, and waited for the thunder of applause that should crown his effort.

They looked in silence. They had certainly seen the thing before--down at the coastguard station, or through a telescope, half-mast high when a brig went ashore on Braunton Sands; above the roof of the Golf-club, and in Keyte's window, where a certain kind of striped sweetmeat bore it in paper on each box. But the College never displayed it; it was no part of the scheme of their lives; the Head had never alluded to it; their fathers had not declared it unto them. It was a matter shut up, sacred and apart. What, in the name of everything caddish, was he driving at, who waved that horror before their eyes? Happy thought! Perhaps he was drunk.

The Head saved the situation by rising swiftly to propose a vote of thanks, and at his first motion, the school clapped furiously, from a sense of relief ...

They discussed the speech in the dormitories. There was not one dissentient voice. Mr. Raymond Martin, beyond question, was born in a gutter, and bred in a board-school, where they played marbles. He was further (I give the barest handful from great store) a Flopshus Cad, an Outrageous Stinker, a Jelly-bellied Flag-flapper (this was Stalky's contribution), and several other things which it is not seemly to put down.

(from Stalky and Co)
Posted by Laban at 8:20 pm
Labels: education, UK politics, your tax money at work

Ah yes - I remember them asking for 'a five word motto that sums up Britishness.
The favourites I saw were;
'No motto please, we're British', and
'Fatso, lotto, tesco, blotto, asbo'

Once it has become meaningless, it becomes very easy to change it. Don't think for a moment that Labour are trying to exhume the spirit of Britishness - they still despise it, as they always did.

This is simply a change of tactic - they previously hoped that a new culture would spontaneously emerge from their sanctioned mass immigration to replace the existing one. Well of course one did, or rather many cultures, al of them hostile to each other. This is simply their ham-fisted attempt to create an artificial one to avoid the utter disaster of balkans-style conflict.

They will fail, of course, because cultures are organic, not artificial.

Plenty of leftie/libs deride Britishness as artificial. That allows a nod to Scots nats etc. (not English nationalists of course). They see Britain as an artificial creation, which there is some truth in this, however it has been around quite some time.

They don't seem to grasp that if artificial Britain is not to work after 200 years (Im counting from the Act of Union here, not James IV/I) then where does that leave its multicultural replacement or the EU for that matter, only a generation old? How long did the Yugoslavian experiment last?

Seems to me that while Scots & Welsh nationalism never quite died out, one would probably only have to go back to the 60s and look forward to a time when they would be as irrelevant as Wessex or Cornish nationalists are now.

A great read! I wish I could get it across to these turds here! Everywhere in America for TOO long we have been waving the flag and the Baby Jesus around like a couple of dead cats. Anyway though it's a damn good sign who the real p---brains around here really ARE!

Anyway, "Britishness" surely must be a VARIABLE product. Sort of like the All-American swindle. I mean there are greater (and lesser!) periods of historical confidence. It hasn't got anything to do with me invading your country and throwing my weight around either. In this little gag I cooked up at the weekend...

...you can see this for yourselves. NONE of the English people in the London bus of 1950 are wearing little Union flag lapel pins! And they are all real self-confident.