The gateway to the Khyber road, the fort at Attock on the Indus. Formerly spanned by a bridge of boats, the river is now crossed by the Peshawar-Kabul road. 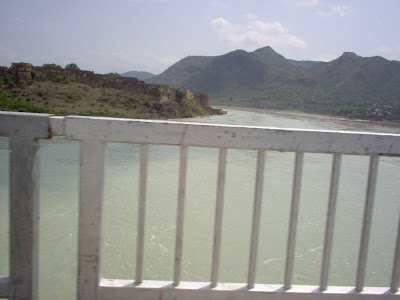 A marble slab inscription set above the inner north gateway of Attock Fort bears the completion date 991 AH (1583 AD). The work was supervised by Shamsuddin Khawafi. The fort is purely a military post designed to hold the river crossing and guard the bridge of boats. The fortifications are built mostly of local shady rock set in thick lime mortar. For arches, vaulting, domes, and the external string-course, small lakhauri brick has been used. The original gateways are of sandstone resembling that found at Taraki in Jhelum District. An interesting feature of the fortifications is a narrow gallery contrived high up in the wall to give the defenders head and back cover. The greater part of the gallery has a vaulted roof, but in one stretch, thick, flat roofing slabs replace the brick vaulting. The battlements, loop-holes and machicolations bear evidence of changes to meet new needs arising from changing armaments.


Akbar not only built the fort, but also established a ferry and a mint and settled a colony of boatsmen from Hindustan, the descendants of whom still live in Mallahitola. The place soon became important for transit trade. To meet the needs of the traders, a serai (inn) was also built. On the road side and up on the hill near a spring there developed several places for ziarat (pilgrimage). Mosques and temples were established up to meet the religious demands of the people. All these buildings have deteriorated.


Picture and info via the excellent and informative urbanpk.com.
Posted by Laban at 7:03 am
Labels: history

Referring to your earlier entry, perhaps Pakistan could have afforded desks for their schools if they hadn't spent the money on nuclear weapons instead?

The second photo almost looks like an optical illusion, one moment it's a set of railings overlooking a river, the next it's a wide shot of a huge damn.