What was it Peter Hitchens said ? The criminal justice system now enforces 'the letter of a bureaucratic law rather then the spirit of an agreed and respected moral code'. 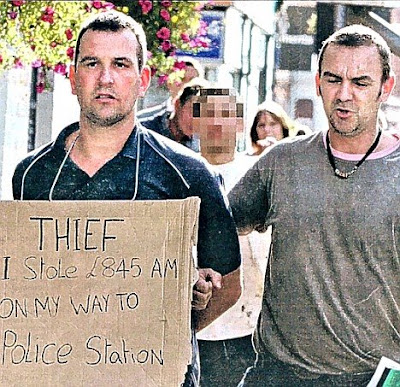 The extraordinary scene unfolded on Friday last week when 39-year-old Mr Gilbert was dragged out of the van in a busy shopping street in Witham, Essex. He was then escorted by Mr Cremer and another man around the corner to the police station. Slung around his neck on a piece of cardboard was the message: 'THIEF. I stole £845. Am on my way to police station.'

Mr Cremer, 41, who runs In House Flooring of Witham, said that Mr Gilbert had been at the company for six months and earned around £1,000 a week. He has been accused of taking a business cheque and making it out to himself. Mr Cremer was contacted by the Cash Converters company after the cheque apparently bounced.

Essex Police confirmed that five men were on bail in connection with the incident.

The spokesman added: ' It's important to remember that people are innocent until proven guilty.'

There was no answer yesterday at the flat Mr Gilbert shares with his girlfriend at a newly-built development near Colchester town centre.

Mr Cremer, who opened In House Flooring eight years ago and has six employees, said he was still waiting for police to return his van, which was seized after his arrest and contains his tools.

Posted by Laban at 6:51 am
Labels: tough on crime

Mobile phone numbers are provided so that you can speak to your local officers about local issues, not for reporting crimes and incidents, which must continue to be reported via 999 (emergency) or 0300 333 4444 (non-emergency).

Do you think a few calls asking about the return of the van would be worthwhile?