Rod vs Rachel - the gift that keeps on giving

The former Mrs Liddle takes another crack at her ex ...

But when it came to choosing a date, Rod prevaricated and told the vicar that we couldn't get married that summer because much of the countryside was shut because of an outbreak of foot and mouth.

Ridiculous, of course, and probably I should have realised then that something was seriously wrong.

In retrospect, I should have been firmer with him, read him the riot act. But Rod has a very powerful personality - that's part of his attraction - and I'm not great at confrontation.

I decided I would have it out with the vicar who married Rod to someone else. I explained I was upset that he had married my ex-husband in his church.

'The breakdown of any marriage is very painful,' he told me. 'I have experience of it myself.'

'But she broke us up,' I complained. 'As far as I'm concerned, they are two parishioners who came to me to be married and I could see no reason not to. The wedding is legal,' he said.

He sounded very cold and matter-of-fact. I told him that if he had bothered to look Rod up on the internet it would have taken him two minutes to find out the truth.

'I don't Google,' he replied disdainfully.

I asked him if he would have conducted the ceremony if he had been aware of the facts. He replied that he didn't sit in judgment of others.
'So God doesn't mind if we sleep with other people's husbands?' I cried in distress.

He told me that he didn't think there was any point in carrying on the conversation.

It has to be said that Alicia is rather fetching. You can see that a man might be tempted. I wonder if she's related to Rosa or the late Walter ? I presume not, as they're Catholics. Rod would have needed an annulment Henry VIII-style to get a Catholic wedding, and with two kids already he'd probably have got the same dusty answer that Henry got. You never can tell though - the Church moves in mysterious ways. 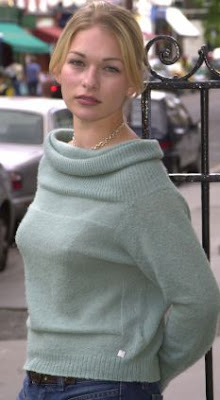 More on the Wod'n'Alicia saga here, here, here and here.
Posted by Laban at 6:13 pm

Another stupid bint gets El Sharfto from the Alpha Male of her dreams. I'll grant her as much sympathy as she'd give to an ordinary PC or Private who dared chat her up in a club.

Plus if she'd ever deigned to spend five minutes with a Beta male, she'd have realised that 'Rod' shows all the classic signs of being a dedicated follower of the philosophies of Mr Robert Sole.

But she'd didn't, so the Hell with her.

Except as a beta male, I wouldnt get a look in...

Tut, tut; "prevaricated" when she means "procrastinated". Uneducated twerp. No wonder he left her.

On second thoughts, perhaps she really did mean "prevaricated". I withdraw my complaint.

Our Rod's not been too well-disposed towards Christians lately, has he? Notwithstanding the church wedding. He was one of those baying for the blood of the registrar who didn't want to do civil partnerships (well, can you blame him - next thing we know she'll be refusing to marry unrepentant adulterers). Then there's been a bitchy little send-off for Ruth Kelly, raking up the standard Opus Dei cliches.

Possibly his conscience is troubling him ever so slightly.