Is she mellowing with age, or have the Labour image advisers been gently pointing out that the style was a bit butch ?

Wealthy socialist Fiona McTaggart, the MP who thinks that the 1st Battalion of the Scots Guards (who were Trooping the Colour the day she complained) are too hideously white, seems to have undergone a makeover : 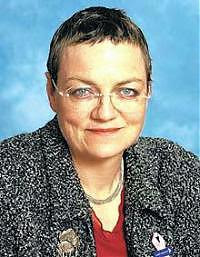 This used to adorn the Home Office website when she was a minister. Now the hair is longer, the whole style softer - in this BBC news video she looks as fluffy as she's ever gonna be. Listen to the immaculate privately-educated (Cheltenham Ladies College, no less) diction as she pronounces :

"That is not the Labour way".

She may be an upper-class entryist of the sort who have destroyed the English working class (in her case by campaigning for their replacement via mass immigration), but even she can see that Gordon Brown is doomed, and the only question is how many Labour MPs he'll take down with him. I must say the conference is going to be fun. With any luck it'll be like the good old days, with frequent interruptions from the floor, slow handclaps, rows in the bar, the works. It looks as if rank and file MPs are doing the job that a Cabinet ought to be doing. But the Blairite years of conformity have taken their toll, and no-one there has any spark of independence. It's down to the poor (excepting their monstrous tax-funded pensions) Parliamentary infantry. Onwards and downwards !

UPDATE - Labour do have the problem that all the potential replacements are duds as well. I personally think a Miliband-led party would bomb even more at a general election. Interestingly Jon Cruddas thinks it's all a waste of time - presumably characterising the whole thing as the Blairite's revenge. But there's some good news for him.

Housewife and hairdresser, lecturer and railway inspector — the group that gathered on a rainy night earlier this month had only one thing in common: all voted Labour at the last election. Around a third remained supporters, the same proportion had switched to the Conservatives and the remainder were undecided.

Blimey. Around a third. In a Labour heartland (Doncaster). They were shown clips of potential candidates and asked for comments.

Miliband : “It was as if he’d just read a book before he came on the television and couldn’t wait to spew it all out.”

Alan Johnson : "I just lost the will to live during this one"

In the clip shown, Mr Cruddas — who once worked in No 10 as Tony Blair’s link with the unions — was interviewed about whether pupils are tested too much. Although the group appreciated his independence — registering strong agreement when he said that British students were the most tested in the world — they continued to warm to him even as he put the other side of the case. His graph shows a steady climb and ends with the most positive scores in the exercise.

“He spoke my language. I understood everything he said,” said one man. “Honest straight from the start,” agreed a woman. Another said that he was an “average person, middle of the road” but also “more interesting” than the others. “He was owning up to things. I actually listened to him,” said one elderly man. “It wasn’t, ‘this is how it is, this is how I want it’; he was open to discussion.”

Rick Nye, a co-director of Populus, said Mr Cruddas was the “surprise package”.

“People warmed to his straightforwardness and, above all, his willingness to criticise existing government policy in the area of testing children in schools, an issue that many respondents could readily identify with. If Labour were looking for an Identikit leader who could transform their political fortunes, he or she would have to be fresh enough to catch people’s eye, frank enough to admit Labour’s past failings, trusted enough to offer an uplifting vision of the future, and strong enough to deliver on their promises.”

I'm presuming that Cruddas wasn't talking about immigration.
Posted by Laban at 9:30 am
Labels: publicans, the contradictions inherent in the system, UK politics

The same John Cruddas who once said that "...with hard work, more social housing, and demographics, the BNP could be neutralised...".

Whatever could he have meant by demographics...

Although "the hair is longer, [and] the whole style softer," like all nulabour wimmin Mctaggart is a minger. I understand why the American electorate have embraced Sarah Palin, she actually looks like a female.

"Upper-class entryist". Dead right. I spent a lot of time at union meetings with my Dad when I was a lad (mostly just pub get-togethers really). He warned me not to talk to the types who turned up in overalls, as these were invariably sociology lecturers et al posing as working men.

The blokes who'd actually done a hard shift that day usually wore a collar and tie in the evening.