The second in the last couple of months.

Mr Scully, however, insists it was not a ‘policing’ problem, but a ‘community’ problem.

“These are someone’s sons, someone’s brothers,” he said. “These people are known in the community. There is a certain racial and religious element to this, I have been and was taunted religiously — and that is a worrying aspect of it. But I would not make that a ‘flag of convenience.’ These are drunken yobs and that is the shame of it. They could probably have a very bright future ahead of them if they only did something about it.”

Police are investigating the assault and say they are looking for three Asian youths, all aged about 16.

The attack has also brought condemnation from Tower Hamlets Council.

The authority’s community cohesion spokesman, Cllr Ohid Ahmed, said: “The idiots who carried out this attack have let their community down as well as themselves and their families. 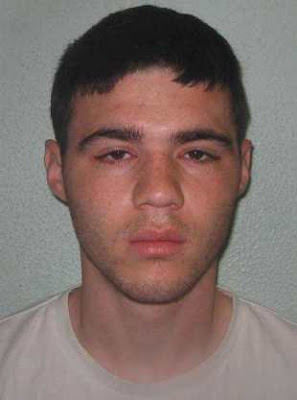 THIS is the yob who has been slapped with a unique anti-social behaviour order banning him from carrying rocks, pebbles and marbles for four years anywhere in London's East End.

The order also bans him from touching any motor vehicle without the permission of the owner for the same period. The 20-year-old was sentenced to an 18-month Supervision Order by Thames magistrates after pleading guilty to stealing from a car on April 30.
He appeared in the dock after being arrested in Wapping on April 22, when he asked for 13 other similar offences to be taken into account. A 60-day curfew banning him from leaving his home in Zetland Street, Poplar, between 8pm and 6am has also been imposed.

"Kalum". Really. Reminds me of this.
Posted by Laban at 9:27 am
Labels: low intensity warfare, the way we live now
Newer Post Older Post Home