It's Non-Stop Torture In The Community

To the names of Brent Martin, David Atherton, Steven Hoskin and Kevin Davies, "vulnerable individuals" living "in the community" who were abused, tortured and killed we add the name of Stephen Gale.

A 42-year-old Leicester man has been jailed for 22 years and nine months after pleading guilty to the murder of his housemate at Leicester Crown Court. Andrew Green, from Garth Avenue, had earlier admitted murdering Steven Gale, 28, at the home they shared with two women in Mowmacre Hill in October 2006. Lisa Smith, 27, and Green's 31-year-old wife Claudette both admitted perverting the course of justice. 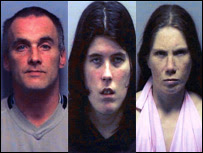 Post-mortem tests showed the victim was assaulted in the days before his death. Det Supt Stuart Prior said Mr Gale had been starved and beaten. "We believe we identified a systematic abuse of Steven, which consisted of both assaults and also failing to properly feed him and allow him to have proper meals," the officer said. "Andrew Green very much took the controlling influence in the household and dominated the people living in the property, and that included Steven."

Police said at the time of his death the victim weighed just four stone, despite his 5'11" height.

During the trial it become apparent that both the authorities and the victim's family had had not idea what he was going through. Neighbours living below reported hearing beatings in the flat three or four times a week. In May 2006 police were called to the flat when Mr Gale tried to escape by jumping from a third floor bathroom window after a row. Green's defence barrister told the court police and social services had visited Steven Gale at his flat on a number of occasions leading up to his death but nobody intervened.

Me no understand this bit :


Melanie Garner who lived below the victim said she heard shouting and screaming from the flat two to three times a week. "We rang the social services, they came out but nothing was done, nothing got resolved. Surely they could see that he wasn't right. He was just skin and bone, clothes hung off him," she said.

A social services spokesperson said they had assessed Steven, who said he did not want help, and judged him capable of looking after himself. Deborah Kitson, director of the Ann Craft Trust, which works to protect adults with learning disabilities, said there was little more the authorities could do.

"What went wrong for Steven was that when he made cries for help, when the agencies police and social services responded, he insisted that he was happy where he was he and wanted to stay there. Currently there is very little that can be done if the adult makes that choice."

One of the characteristics of all the recent killings is that the victims refused - presumably out of fear - to dob in their abusers. Surely the Ann Craft Trust should realise this ? Otherwise what's the point of their existence as an organisation "acting Against the Abuse of People with Learning Disabilities" ?

A look at their "campaigns" page isn't terribly encouraging.

"Our campaigning focuses on injustices in the legal system" - I'm pretty sure no lawyers have beaten any "naturals" to death lately.

Oh Lordy - "Disability Hate Crime". I suppose the idea is that although the current criminal justice system is totally unable to enforce existing laws on anti-social behaviour - witness the tragic fates of Christine Lakinski and the Pilkington family - they hope to add the disabled to the list of "protected species" aka designated victim groups.

More at the Leicester Mercury :

Parents of a vulnerable man beaten to death by his unofficial carer today branded his killer an "evil, wicked man". Stephen Gale, who had special needs, was subjected to months of torment, violence, starvation and abuse by Andrew Green at their shared home in Mowmacre Hill, Leicester. Yesterday, Mr Gale's family cheered in court as Green was jailed for nearly 23 years.

Mr Gale's mother Maureen, 55, said: "Green is an evil, wicked man. We are absolutely elated that he got more than 22 years and we feel we have got justice for the family and for Stephen. "I especially loved it when the judge said, 'take him down' and he was led away to start his sentence. It's been a year now since we lost our son and nothing will ever bring him back, but he is safe and at rest now."

When he died, the 28-year-old weighed less than six stone, half the normal body weight for his 5ft 11ins frame. A final fatal attack on October 25 last year left Mr Gale with a catalogue of injuries. As Stephen's body lay on the floor of the shared home in Garth Avenue, Green callously ordered his wife, Claudette (31), and housemate, Lisa Smith (27), to lie to police, blaming someone else for the injuries.

Green (41), who admitted murder, was the bullying "leader of the pack," of the shared dysfunctional household. He controlled the finances, and took Steven's benefit money and cash sent by Mr and Mrs Gale, of Little Hampton, Sussex, who had no idea of their son's terrifying ordeal. Nirmal Shant, prosecuting, said neighbours had seen Green, and occasionally the two women, attacking the victim in the street. She said Stephen once tried to escape a beating by leaping out of an upstairs window, but he did not complain of mistreatment. He died from multiple injuries, internal bleeding and shock. Miss Shant said: "The fatal attack was sustained. He fell to the ground and continued to be attacked, trying what little he could to defend himself and was left for dead for some time before the ambulance was called."

Green, who has an IQ of 72, in the bottom three per cent of the population, told police another man had attacked Mr Gale away from the home. He told officers: "I was like a carer for Steve and looked after him for so long. He meant the world to me."

The co-accused initially backed up his story. Claudette Green and Smith, also said to be in the bottom range of intelligence, were both given nine-month jail sentences, suspended for two years, coupled with 12 months of supervision. All three admitted conspiracy to pervert the course of justice. It was accepted by the prosecution they had been under Green's "spell" and were manipulated by him.

Judge Michael Pert QC ordered Green to serve at least 22 years and nine months before he can be considered for release. He told Green: "It's a horrible tale. You styled yourself as his carer. You starved him, beat him, took his money and controlled every aspect of his life. He became so weak your continued beating killed him."

William Taylor QC, defending Andrew Green, criticised police and social services for not intervening. He said the violence had escalated over a year. Leicester City Council's social services said Stephen was offered help, but he had said he was fine.
Dad Malcolm, 57, said he spoke to his son on the telephone five days before his death. He said: "There was nothing to indicate he was in trouble or in pain. We can only think he was too frightened of Green. We've got to the point now where we can begin to draw a line under this, because Green has got everything he deserved."

I'll lay a pound to a pinch of **** that the sentence is reduced on appeal.
Posted by Laban at 12:33 am
Labels: social workers, the way we live now, torture in the community, underclass

He seems to have been let down by his own family as much as by 'society'...

Echoing Juliam thoughts I would be interested to know why he did nt live with his own family. His parents were not elderly.

Furthermore how could a man with an IQ of 72 ever be considered suitable as a carer?

As usual the women get off virtually scott free. Under his spell my @rse.

The man would have been better cared for in one of those dreadful old Victorian institutions we are so proud of having closed down. He would have been fed, watered, and alive.

"I'll lay a pound to a pinch of **** that the sentence is reduced on appeal."

"Judge Warwick McKinnon, said: "In each case the sentence of the court on the remaining count will be a supervision order for a period of 12-months.

"I simply hope that what has happened to you, that you had to serve two-months of the original sentence, has benefited you.

"It would mean that some good has come out of the case." "

Another Judge totally out of sync with reality.