As a schoolboy in Bromsgrove I was blissfully ignorant that my headmaster, EJS 'Ernie' Kyte, had been an RAF Squadron Leader and mentioned in despatches during WWII.

I didn't know about the Town Clerk (presumably of the old Urban District Council, destroyed by a modernising "Conservative" called Peter Walker in the 1974 reorganisation that wiped out so many historic counties) either. Fancy him flying with Tony Benn's big brother ! And when I read of that brother's death, I detest Tony Benn less - even have some human sympathy for him. Careful, Laban. 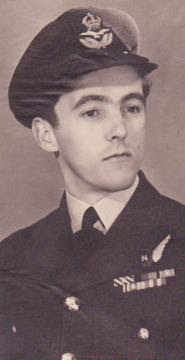 In Second World War night-fighter operations the understanding between the navigator, who acquired the target with his airborne interception radar, and the pilot, who carried out the attack on it was crucial to success. Without it, all the technology and flying skill in the world could not deliver a result.

In two tours, one in Beaufighters and the second in Mosquitoes, the instinctive rapport between Arthur Hall and his pilot, Leslie Stephenson, was the key to their eventual tally of ten combat victories, gained in the very different operating conditions over North Africa and northwest Europe. Pilot and navigator were each twice awarded the DFC.

Hall and Stephenson were one of the outstanding night-fighter crews of the war. Unlike German night-fighter pilots who had the pickings of huge bomber streams over their cities night after night, the RAF's fighter men had, by comparison, somewhat slender pickings as the war went on.

George Arthur Hall was born in Yorkshire in 1920. His mother was a Pudsey mill worker and his father a taxi driver who had to give up work through ill-health. Hall got a scholarship to a grammar school but in the Depression years had to take odd jobs to help to replenish the family coffers. There was no money to send him to university so he became a local government junior clerk.

On the outbreak of war he went to an RAF recruiting office in Leeds to volunteer as aircrew. A sight defect ruled him out as a pilot so he trained as a navigator. When he became aware of an increased requirement for night-fighter navigators, he volunteered and trained on airborne interception (AI) radars. At 54 Operational Training Unit (OTU) he teamed up with the pilot Michael Benn (the elder brother of Tony Benn, who followed him into the RAF). The pair were commissioned and posted late in 1941 to 141 Squadron, flying Beaufighters.

On one of their early sorties their Beaufighter was hit by “friendly” fire at 10,000ft over the Firth of Forth. Hydraulics were damaged, making it impossible for Benn to control the aircraft. To attempt a landing would have been suicidal, so the ground controller directed both men to bale out at 6,000ft over the moors of Northumberland. Hall landed close to the mansion seat of the Marquess of Tweeddale, by whom he was sumptuously wined and dined until retrieved by service transport. The Hon Michael Benn, the elder son of the 1st Viscount Stansgate (himself a decorated pilot from the First World War), also landed safely and found his way to a labourer's cottage, where he spent the intervening interval wholesomely but somewhat more frugally entertained — a contrast much relished by the mill town-reared Hall.

In the autumn of 1942 Benn left No 141 to join a squadron being formed to participate in the Anglo-American “Torch” landings in French North Africa. Hall then teamed up with Stephenson. Three months later they, too, were to find themselves in North Africa with 153 Squadron, also a Beaufighter unit.

As the Allies advanced to the frontiers of Tunisia, the ports and airfields they occupied came within range of German bombers based in Sardinia and Sicily, and the night fighters soon had more “trade”. Stephenson and Hall opened their account on April 17, 1943, when in the fading light of dusk they attacked a formation of ten Ju88 bombers which were approaching Algiers from the east. The lead bomber selected as the target of the attack dived steeply away and disappeared. But Hall maintained radar contact until Stephenson could again see the bomber, sending it into the sea with a few bursts of his cannon.

May was to prove a most dramatic month for the pair. On the night of 11-12 they shot down two Ju88s in a single sortie, arriving back at base to be cheered by their ground crew. The Tunisia campaign came to a close the following day, but with Allied forces building up to the assault on Sicily there was continuing and intense Axis air activity. On the night of May 23-24 they were to exceed their previous perfomance with a remarkable three-kill sortie — all Ju88s — which brought a telegram of congratulation and the award of an immediate DFC to each from the AOC, Air Vice-Marshal H.P. Lloyd. In this, the vital contribution of Hall to the night's successes was fully acknowledged: “...the skill displayed by this officer was outstanding and it was largely due to his efforts that the pilot was successful in destroying three enemy aircraft.”

Both men were very nearly killed the following day when one of the Beaufighter's engines exploded on takeoff and, without power to climb, Stephenson had to slam it back down on to the ground. There, at flying speed, it soon ran out of runway and ended up slicing through a small wood at the end of it, without, however, breaking up. As they fled the wreckage away from flames and exploding ammunition Hall and Stephenson were able to thank their lucky stars for the Beaufighter's robust build.

After the Sicily landings in July, Hall and Stephenson were rested from operations as instructors in different OTUs. But they were reunited in 1944 in 219 (Mosquito) Squadron, which after D-Day was soon busy in the night skies over Normandy. Their first combat victory, in August, was over a Ju188 over Caen, acquired by Hall on his radar at four miles range and finished off by Stephenson from 250 yards with two bursts of cannon fire.

They were soon operating in German air space, and their second kill, in September, was of a Ju88 over Erkelenz in the lower Rhineland. They next accounted for an Me110 over Krefeld and, their tenth and final kill, another Me110, over Hasselt, Belgium, on Christmas Eve. From this sortie they landed on Christmas morning, shortly afterwards to be awarded Bars to their DFCs. A few days later Hall learnt with great sadness that his first pilot, Michael Benn, had been killed in action, having won the DFC.

The pair might have had an eleventh kill when Hall's radar acquired what turned out to be a twin-engine, twin-boom aircraft over the Rhine in February 1945. The only aircraft of that configuration known to them was the American Lockheed P38 Lightning, and they withheld their fire. It was only later, in discussion with a debriefing intelligence officer, that it emerged that their sighting was undoubtedly a Focke-Wulf Fw189 “Uhu”, a reconnaissance type that had only just begun to operate in the area. A Luftwaffe crew had had a lucky escape.

After the war Hall qualified as a solicitor and worked in local government. He was town clerk to Bromsgrove Council, Worcestershire, 1961-74. He is survived by his wife, Irene, whom he married in 1946, and by a son. Another son predeceased him.

Posted by Laban at 10:17 pm
Labels: Bromsgrove, Bromsgrove County High School, the way we were