"Sometimes it is hard to avoid despair" 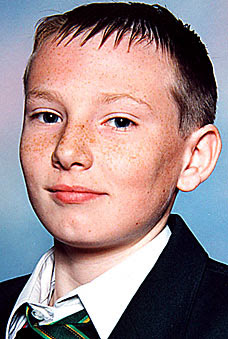 Mrs Dinnegan said she learned of Martin's murder when her eldest son received a call at their home in Holloway shortly after it happened. She said: "One of Martin's friends phoned to say Martin had been stabbed and they didn't think he was breathing. Apparently they were looking at each other the wrong way. "I've just been speaking to one of his friends - apparently, there were lots of boys fighting and he said he looked and Martin was lying on the ground."

Mrs Dinnegan said police initially told her it was a robbery and that his attackers were five black youths on bicycles. Police sources stressed, however, that detectives are keeping an open mind on the motive. Inquiries had revealed that Martin was with a group of friends who became involved in an altercation with another group of about 15-20 youths following "a verbal exchange".

"At first I thought it was to do with his mobile phone but it turns out that it’s not. The police have found his phone. He must have let it fall in the struggle."

"When they returned there was a row going on between Martin and a large group of boys - I heard 16. He saw Martin fall to the ground and he thought he had been knocked out. Martin was lying on his back and the boy tried to call him. He said he would never forget the colour of Martin's face. He was white then went blue. He said his eyes got scary and just staring, and he kind of gasped. They were calling his name, saying 'Martin wake up, wake up.' He opened his mouth to try and say something and then nothing came out. They tried to get him up because they didn't realise he had been stabbed in the back but the boy said to me he knew he was dead."

A man in his twenties was stabbed to death in east London earlier today, triggering the eighth murder inquiry in the capital in just seven days.

A man in his thirties has been killed in a London pub brawl as the wave of recent violence continued in the capital. Police said they rushed to the scene outside The Rocket Pub in Euston Road, north-west London, after reports of a fight shortly after 11pm last night. But they found a man, who has not yet been identified, dead at the scene.

I was standing this evening at the door of Bloomsbury Waitrose, watching the rain plummet down. It felt like the Bangkok wet season. Water was tumbling off the awnings and overwhelming the drains, reminding me of the mountains of Bali.

Sometimes it is hard to avoid despair.


Bloomsbury Waitrose is a couple of hundred yards from the Rocket pub, and about two miles from Tollington Way, where Martin Dinnegan - a child - was murdered. You do have to wonder about Ms Bennett's sense of proportion. I think a quote from W.M. Thackeray is in order here :

" ... these wonders and terrors have been lying by your door and mine ever since we had a door of our own. We had but to go a hundred yards off and see for ourselves, but we never did ..."
Posted by Laban at 11:17 pm
Labels: the way we live now

I no longer have a country. And I loved my country so.

''Mrs Dinnegan said police initially told her it was a robbery and that his attackers were five black youths on bicycles. Police sources stressed, however, that detectives are keeping an open mind on the motive.''

I bet the filth wouldn't be keeping an open mind if 5 white boys had killed a black one
It might even have been reported on the BBC.
What cha fink?

I find it heartbreaking to look at the photo of Martin, it has that wonderful cheeky, mischievious innocence of childhood.

Verity - no country in the present but one in the past we can still be proud of. And today we still have Race and Nation.

Barely mentioned in the media is the one measure which, at a stroke, would
reduce the toll from knife crime... Stop and Search. But of course that would be discriminatory, racist, a denial of someone's 'human rights' (oh the irony)and on and on. Surely parents of kids at risk of death or injury would be more than happy to see their kids regularly stopped and searched. In fact why aren't they clamouring for it ? After all if all kids of all colours were targeted who could object? God knows I was stopped and
searched all the time in my youth, annoying, but hardly the end of the world.

And while Martin was being tragically murdered another child, whose name neither you nor I know, was tragically dying in Africa, a victim of climate change. Both are causes for despair, or calls to action.

I would respectfully suggest that we might be able to do more - and more quickly - about children getting stabbed up the road than about people in Africa who are short of water and food - and over whose countries we have no authority.

It's like having a sick child in bed upstairs, dehydrated, neglected, and running a temperature, while sitting in front of the telly downstairs, watching a heart-wrenching African documentary about dysentery and writing out a cheque for Water Aid.

Really, what you do except vote BNP?
The indigenous population is disarmed
and cowed.