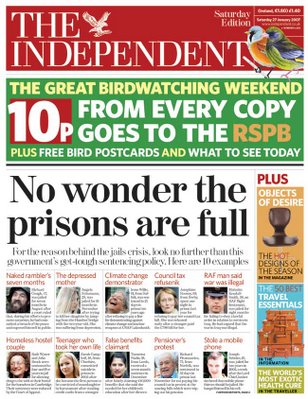 "No wonder the prisons are full", featuring :

Two pensioners jailed for not paying the iniquitous council tax. I don't think they should be banged up either, but then I think a great deal of taxation is evil and that payment of it should be avoided as much as possible. I thought the Indie were rather keen on us all paying our taxes.

An Asian lady from Leeds who falsely claimed £40,000 of benefits which she apparently "needed for her children's education". I thought the Indie disapproved of taxation going to fund private schools. If she'd been white the Indie would have called for the death penalty.

"The depressed mother". Ahhh ! Fancy banging her up for being depressed ! What's that ? She tried to kill her toddler ?

An RAF officer who refused to obey a lawful order. Presumably like me the Indie feel he should have been shot. That would free up a space.

A famous sexual deviant, hopelessly addicted to exposing himself. Rampton is the place for him, so the Indie have a point.

Another one of those mad 60s leftovers who vandalises military bases. She only got 23 days, so she's not exactly clogging up the system. Send her to Guantanamera next time !

Joseph Scholes. A sad case, mental hospital would have been better for this boy. Perhaps his parents should have been banged up instead. But as he killed himself nine days into his prison sentence he can hardly be accused of bed-blocking either. If all prisoners were to follow his example we'd only need half a dozen jails.

Two pointy-headed hippies who let the clients deal smack at their hostel. Mind you, if allowing drugs to be dealt and consumed gets you a sentence, half the mental hospital staff and prison staff would be inside. Then quis custodiet ipsos custodes ?

Then "teenager who took her own life", liberal pin-up Sarah Campbell. Not until she'd taken someone else's first.
Posted by Laban at 6:35 pm
Labels: pointy heads, tough on crime

If someone who tried to kill a toddler can be described simply as being a "depressed mother" perhaps the Independent should consider these prisoners:

The Community Doctor- Harold Shipman was jailed for life due to his efforts to control the elderly population of Hyde. He committed suicide whilst still in prison.

The Landlord's Wife- Rose West was jailed for life after her Husband assaulted some guests. She was jailed in spite of having recently lost her daughter Heather.

The Disabled Muslim- Double hand amputee Abu Hamza was imprisoned for several years due his promotion of his faith. He had argued that infidel courts had no juristriction.

Its all very well to say this stuff but something must be going on, the offical in jail figures have risen quite a lot in the last 20 years.
Better at catching them?
More criminal offences?
Tougher punishments?

That is one of the more sane Independent front pages, believe it or not. Some of them are utterly bonkers.

Dave: perhaps the 60s are coming home to roost?