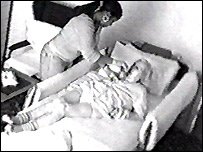 I'm not usually in favour of the increasing litigiousness of the UK but in this case, I can only say....only five figures....?!

what if the colours had been the other way around?

how on earth were they found "not guilty" of assault???

"how on earth were they found "not guilty" of assault???"

I'd wondered about that myself - presumably, the prosecution couldn't prove that the substance fed to the lady in the video was talc....?