Hey - it's OK - the foetus doesn't feel pain ! An expert has said so - in the British Medical Journal, no less. Carry on killing ! (unless you're engaging in female foeticide, of course).

The interview is 25 minutes in (RealAudio).

Humphrys (interrupting) - "But that would suggest it's weeks - possibly months - after birth - and surely that's nonsense, isn't it ?"

Derbyshire : "It possibly is weeks, possibly months - I mean it's very difficult of course to ever draw a line as to precisely when it happens - but I do think we can draw a line and say that it is vitally dependent upon a process that's going to take place outside of the womb. Pain - in the same way - all experience is in a sense social (at this point Humphrys looks round nervously to check that he can get to the door - LT) - it's dependent on other people, and that doesn't occur until the point of birth."

Humphrys : "Dr Derbyshire, many thanks"

Oh for the forensic intellect of a Natalie Solent, to fillet this fool as he deserves ! Lacking that, I'll plough on as best I may.

One can see what he's getting at, of course. Sharply withdrawing the foot from the amniocentesis needle, "screaming" as the abortionists suction cannula approaches, frantically flailing about during uterine contractions as your heart rate hits 200 - hey, maybe it's "just a reflex reaction". You get into the open air, someone holds you upside down, runs a finger round your mouth and slaps your back - that crying's just reflex. Maybe the little one doesn't really know that he's in pain.

We're back with Bishop Berkely, and all our experience being just a set of pictures in the brain.

This would seem to be nonsense even on the bad doctor's terms. Were some ill-intentioned person to go up to him and stick a needle in his hand, he'd snatch the hand away by what I'd call instinct. He wouldn't stop to consider whether it hurt or not. But that doesn't mean that it wouldn't hurt.

This isn't some wonderful new theory - Mr Derbyshire was expounding it in that same BMJ ('the Guardian in a white coat') ten years ago. Why are the BBC and BMJ bigging him up now ?

"The US is considering legislation to make doctors tell women seeking an abortion it will cause the foetus pain."

Ah, I see. Those evil Americans, not killing people again. They're quite happy to execute murderers, but against killing babies. How sick can you get ?

For the father of children, Dr D seems totally convinced that the unborn have no interaction with humans outside of the abortionists saline injection. Didn't his wife talk to the baby ? Our children certainly reacted to outside stimuli while still in the womb.

Dr D's thesis, of course, implies that you could torture a new-born, or indeed month-old baby to death over a period of days without it feeling pain, or being able to "to process the subjectivity of pain" as he puts it.

And as for animals - well, when did a lab rat last have much of a relationship with its carers ? Looks like open season on dumb animals - and he does indeed support medical experimentation, in a robust spiked piece lambasting the appeasers in the medical research laboratories, kow-towing to the animal rights lobby.

"The impression is that research animals are a 'necessary evil', when in fact they are necessary, period."

Dr D wrote this from the relative safety of Pittsburgh, PA, a place not renowned, as is the UK, for the extreme violence of its animal rights lobby.

Strangely, though, he doesn't attempt to argue that animals don't feel pain. He writes of them being "distressed" and that they "will suffer". Surely, if the beasts have no interaction with humans or other animals, even supposing the degree of brain function which Dr D considers necessary for consciousness, then we can chop away with a will.

Dr D reminds me of another brain guru who seems to have no knowledge of actual human beings - Richard Dawkins. Logic is all. I detest SHAC and the Newchurch Nazis as much as anyone - but Dr D is scary too. He's an utilitarian extremist.

"It makes no sense for animal researchers to engage in a discussion of animal welfare beyond ensuring that the animals will be properly housed, fed and exercised, and that they will be generally physically and behaviorally nourished as much as possible to benefit their performance as an experimental subject. The idea that we should - or even can - be any more concerned about their welfare stretches credibility.

Giving animals AIDS and other diseases, carrying out experimental surgeries and infusing untested drugs hardly sound like procedures aimed at protecting the animals' welfare. Mistreating animals is unacceptable because it ruins experiments - but any further concern for the animals' wellbeing is beside the point."

You could apply these same arguments to animals which will be killed for food. I happen to think it makes perfect moral sense to care for animals up until the time you harm them, and that there is such a thing as a necessary evil. Even if they don't fit Dr D's exacting definition of consciousness.

"Those of us who research with animals, or support the benefits of such work, have made a moral choice. We place human wellbeing and health above that of animals and we unequivocally believe that human life comes first."

Well, some human lives, anyway. As the BBC acknowledge, Dr D "is linked to pro-choice groups". He certainly is - namely the Pro-Choice Forum, which seems like Spiked to be run by the his old mates in the Living Marxism crowd. 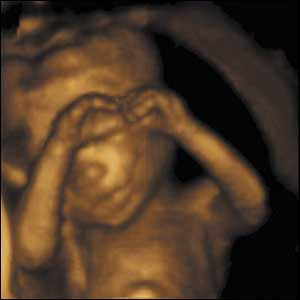 
"By the second month, the embryo will kick and jerk if poked at, and by the fourth month the stroking of the eyelids will result in squinting instead of a violent jerking movement: indeed stroking the lips results in sucking behavior.177 Tickling the scalp of the fetus at the surgical induction of labor will result in movement; Liley writes that "stroking the palm of the prolapsed arm elicits a grasp reflex, and to plantar stimulation the footling breech obliges with an upgoing toe."178 According to Verny, by the fifth or sixth month, the fetus is "as sensitive to touch as any one-year old.179

In addition, the fetus will respond with "violent movement" to a needle puncture. Goodlin reports that during the performance of "hundreds of amniocenteses" normal, healthy near-term infants would invariably respond to "needle sticks" with movement and drastic fetal heart-rate changes."

Liley, using multiple fetal x-ray films, described the process of birth and particularly contraction as one of "frantic" flailing fetal movement, with the arms and legs being thrown about and what appeared to be an active resistance to each contraction. Liley observation was that this behavior is characteristic of the reaction of a post-birth human being to severe pain. Liley writes:

If one attempts to reproduce in the neonate by manual contraction a mere fraction of the cranial deformation that may occur in the course of a single contraction the baby protests VioIentIy.190

Liley, citing Karelitz' findings, writes that the first sleep of neonates after birth is "more profound than any subsequent sleep" based on the strength of the stimuli needed to awake them, thus testifying to the ordeal that labor has indeed represented.192
Posted by Laban at 4:41 pm
Labels: liberal myths

Its all part of that leftist marxist blank slate fantasy.
* Babies can't possibly feel something because ""all"" behaviour is learned and nothing is innate.

Does the fox feel pain, or the deer? The answer doubtless is "what would you like me to say, P.M.?"

Thanks for pointing this out as I missed the interview (I'd rather spend the Easter weekend more pleasantly than hearing proabortionists justify tearing babies apart).

Good point that this isn't a new theory, as the proabortionists have been using it for ages and it's always struck me as ludicrous. They obviously think that it is necessary to come up with these ridiculous theories in order to make abortion palatable.

I did see Derbyshire on Channel 4 news and found what he said utterly unconvincing. I hope everyone who hears him thinks the same. How can anyone think that tearing a baby apart does not cause pain given how early the nervous system develops and the likelihood that babies can cope with less pain than adults anyway as they can't understand why it's happening? And even if the ludicrous concept that dismembering a child before birth was painless, how does that make it right anyway? How can anaethetising and then killing someone make it right?

Is that what you think? You all make me laugh. Sit on your high horses in total ignorance. You are all as bad as the man spouting the rubbish that the foetus doesnt feel pain. Ignorant insensitive scaremongering is as bad as the rubbish he spouts. Worse probably. You speak of people turning to the BNP because they arent listened to and laugh at those who ignore this. Do you suppose making abortion illegal will stop it? Or will not being listened to when youre desperate force you into a desperate and dangerous situation? Are you really so thick as to imagine that women undergoing an abortion arent conscious of the horror of it all?