"So when are you and Daddy getting divorced?’ is a question that mothers whose daughters are hooked on Jacqueline Wilson have become accustomed to hearing."

Ever since my son was given at school a Jacqueline Wilson featuring the child of separatedmumlivinginsquatwithradicalstreettheatre-runningboyfriend who finds Semtex lying about the place (an everyday story of what his Dad did in the Seventies) I've been suspicious of this woman, produced by mad Edinburgh geneticists (an early failure can be seen here) as a hybrid of Jenni Murray and Muriel Gray. 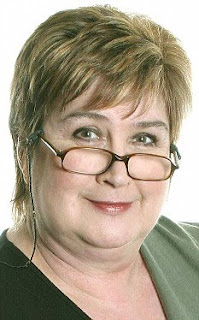 The boys stuff is worse. Gone are the days when the end of each chapter left Biggles and Co. facing some cliff-hanger. My eldest cuts straight to the chase with the collected works of Chris Ryan, and his younger brother has gone through the entire Darren Shan cycle, where the dilemma at the end of each chapter is who to kill next.


Now the youngest child, my seven year old daughter, a voracious and precocious reader who has polished off all the Harry Potters, has discovered some of the darkest stories imaginable, tales of hunger, cold, abandonment, death and magic. I have to read two or three to her every night. Even her elder brother listens.


She sat down, and bent her head low over the grave, as if she could see her child through the earth that covered him—her little boy, whose smile was so vividly before her, and the gentle expression of whose eyes, even on his sick-bed, she could not forget. How full of meaning that glance had been, as she leaned over him, holding in hers the pale hand which he had no longer strength to raise! As she had sat by his little cot, so now she sat by his grave; and here she could weep freely, and her tears fell upon it.

“Thou wouldst gladly go down and be with thy child,” said a voice quite close to her,—a voice that sounded so deep and clear, that it went to her heart.

She looked up, and by her side stood a man wrapped in a black cloak, with a hood closely drawn over his face; but her keen glance could distinguish the face under the hood. It was stern, yet awakened confidence, and the eyes beamed with youthful radiance.

“Down to my child,” she repeated; and tones of despair and entreaty sounded in the words.

“Darest thou to follow me?” asked the form. “I am Death.”

She bowed her head in token of assent.

She's discovered Hans Christian Andersen and the Brothers Grimm in the Victorian original. Have a look in the remainder bookshop and you'll find cheap reprints of the original texts.

Child abuse, domestic violence, even anti-semitism - all the things young children see around them every day. Great stories, totally un-PC but full of wisdom - and written in a style which a Victorian, with a few years of village schooling, could take in her stride but which needs some (not too much) softening for todays State-educated child.


(The quote is from The Child In The Grave, a cheerful tale of bereavement. She seems to like that sort of stuff - The Little Match Girl is another favourite. What was it again about the Victorians idealising childhood ?)
Posted by Laban at 10:03 pm
Labels: books