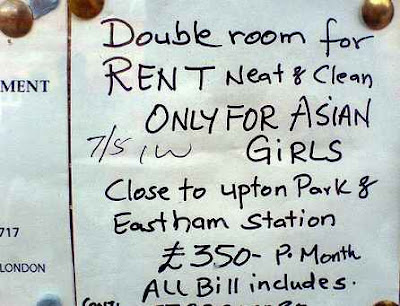 But these signs are presumably illegal under British law. I suppose the reason we're not seeing these cases in the court reports is that the law was designed to stop natives putting up these kinds of advert.
Posted by Laban at 7:22 am
Labels: liberal myths, the contradictions inherent in the system, UK politics

Not sure where its from. Id be genuinely curious to know the truth because its a phrase Ive heard so much of, but scant evidence

1) Florence Nightingale was a pervert who corrupted innocent young girls; whereas only Mary Seacole did any good

2) Queen Victoria was the "Famine Queen" who insulted the Irish by only stumping up a fiver for famine relief, less than she gave to the dogs home. In fact apparently she donated £2500 - a very considerable sum

And even madder stuff

Doesn't seem to operate on the basis of historical evidence, rather in tales that grow in the drinking.

For 19th century Nationalists and beyond spin and exaggeration did have a considerable utility - eg Cromwell at Drogheda.

As for 2, little known fact, but the most generous during the famine were the City of London Jews

Ed (first comment): I'm curious too, but also note with interest how phrases like "isolated incident" and "moral panic" can magically vanish from the liberal vocabulary when the occasion demands.

Ed, the one you link to is the same one as in Laban's post.

There was an album cover of some years back (Ian Dury maybe? Complete guess, anyone remember it?) which showed such a sign. It may very well have been the same pic.

Every single one of the dozens of people I know from the generation that came across in the 50s and 60s "remembers" those signs, or more accurately, says they were well known. Coincidentally, every single one of them appears to have found lodgings and paid work on their first full day in England.

When asked though, I've never met anyone who can state an actual case of having seen one themselves. And I do mean not one. I'd say that at the very least their prevalence has been enormously exaggerated.

I think it was John Lydon's autobiography. The cover of the present printing just has his picture, but I'm fairly sure an earlier edition had the same pic cited by Laban and Ed.

Agree though, Ive never read of a specific sign actually existing. I did remember a 'no Albanians' sign making the papers a few years back, so Im not saying it couldnt have happened

Perhaps it's the only one. Perhaps there was only ever the one "no dogs - no Blacks - no Irish" sign in one boarding house window, stuck up by a landlady who'd had a particularly bad experience with a Smoked Irishman and his pooch.

Quite enough to precipitate a meme when there's an itch waiting to be fed. Quite enough to trigger any number of "real" if always curiously indeterminate memories.

I would have thought that even in the 50s B & Bs generally advertised their presence with something a little more substantial than a hand-written note Sellotaped to the window. It smells bogus - which is not to say that discrimination never happened, of course.

It sounds more like the usual bogus victimhood, at which Irish Catholics are expert.

The only people who believe them are the Americans.

Having lived in London during the early sixties, looking frequently for new lodgings, and then for somewhere to house my Jamaican wife and young baby I can can confirm that the 'No blacks, no Irish, no children no dogs' signs were everywhere to be seen, so commonplace that we took no particular note of them. In my experience though they were not signs of prejudice but of fear and defensiveness. When face to face people made individual judgements not blanket refusals.

I'm just surprised that no one seems to have mentioned them at the time - and if they were so ubiquitous as to be commonplace, and therefore unremarkable, it's still surprising (to me) that no one found them reprehensible enough to be worth a mention or a snapshot.

But as I say, I've not really done much digging other than a quick Google.

I wonder if london Irish landords discrimated against Irish immigrants?

I remember seeing Kathy Burke on a chat show talking about her irish dad being unable to get a job on a London building site in the 70s!!

Anyone who had signs in their window saying "No Irish" in 1950s London would have got a brick through their window, given the size of London's Irish population.

A neighbour of mine (Labour, Glasgow Irish, working class) has always claimed 'No Irish' signs existed.

As far as she was concerned this was sensible policy. The Irish she knew were mostly young, dumb, male, employed in construction and tended towards heavy drinking. She thought that landlords simply didn't want the hassle of dealing with big angry drunks.

As many have pointed out, what happened to all these Irish (and blacks)? In the end they all appeared to have found somewhere to live.

In newspaper ads for vacant properties in Hampstead,'Gentiles Only' was a common letting criterion both before and after World War II.

http://en.wikipedia.org/wiki/Anti-Irish_racism has more and some sources.

And that sign photo doesn't look older than John Lydon's book.
The handwriting, the sepia, the casual taping to the window all look wrong.

"Now I've got no real problems with an Asian family wishing to share their house with people of their own culture or ethnicity - or even rent it."

No, and I haven't either. But apparently when it's a member of the Graunority being excluded it's a big deal :

It's the sheer double standards which annoy.

qv Graunority: a member of a minority group which exercises the Guardianista.

Enfield Council want to ban spitting in the street, why?

I see the 'locals' of Brixton can watch footage of the '81 uprising' on a big screen in Windrush Sq.

I wonder if any of looted shopowners will be asked for a contribution.

'It's the sheer double standards which annoy.'
Agreed, anon; however Newham is an area where the Graunority, as you call it, are actually the majority, and the 'white British' a small declining minority.
'Asians' (ie South Asians in this case) hold the plurality at the moment, at around 40% of the population, and presumably have enough clout with the local Racial Equality Council to get them to overlook adverts like these.

My dad grew up on a Sioux indian reservation in South Dakota. Later on he went into the US Marines during the Korean War.

He always said it was bullshit that there were signs that said "No dogs or Indians" (South Dakota) or "No dogs, Marines, or sailors" (San Diego). He never saw any and no one he knows had ever seen one. It was always a friend or a relative of the person saying they saw one that had, supposedly, seen one. The old friend of a friend.

I think you are completely right: it's like a huge and historical puzzle. There aren't documents about it, and this fact is the most important to mentioned, absolutely.

The sultan of Turkey was the most generous. Queen Victoria didn't want to be outdome and asked him to give less than her. See the Dundalk flag with the Turkish symbol

I wonder if anyone will ever come across this now? Just would like to say, that the famous 'no irish, no blacks, no dogs' sign was entirely staged. Leastways as it appears in the Windrush documentary from 1955.

My grandmother, Pat Powell, is the lady answering the door and shaking her head to the chap asking for a room. She did this at the request of a film crew working in her street, who asked her to do exactly that, without telling her what it was for. If you examine the adjoining scene with the sign, it's a different window, different bricks, different lace curtain.

So, my feeling is that the sign in everyone's memory, is just that scene from the newsreel.

Thanks for sharing such a nice info with us. Fantastic writing skills. Instagram Package from likeswatch I appreciate this blog