"there seems to be something wrong with our bloody reactors today" 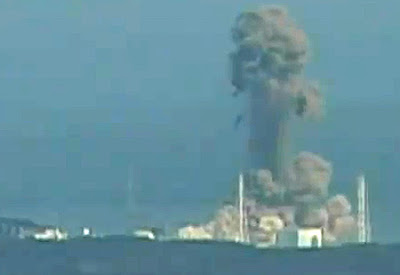 OK, so thanks to the commenters I grasped why the Japanese reactors were still hot despite having control rods. When you shut down, or SCRAM, a Boiling Water Reactor of the sort you find at Fukushima, there's still residual heat - because nuclear reaction products are in the fuel. These typically have short half-lives, which means they give off a lot of heat as they (quickly) decay.

When a nuclear reactor has been shut down, and nuclear fission is not occurring at a large scale, the major source of heat production will be due to the beta decay of these fission fragments. For this reason, at the moment of reactor shutdown, decay heat will be about 7% of the previous core power if the reactor has had a long and steady power history. About 1 hour after shutdown, the decay heat will be about 1.5% of the previous core power. After a day, the decay heat falls to 0.4%, and after a week it will be only 0.2%. The decay heat production rate will continue to slowly decrease over time; the decay curve depends upon the proportions of the various fission products in the core and upon their respective half-lives.

Sounds like they should cool down pretty quickly, I thought. I just hadn't realised how very powerful these beasts are. Fukushima reactor 1 (the one that went bang first) generates 439MW of electricity, and let's say it's 45% efficient (I gather that's on the high side, but it makes the mental arithmetic easier) - in other words only 45% of the heat produced gets turned into electricity, and our reactor is producing 1GW of heat.

"For this reason, at the moment of reactor shutdown, decay heat will be about 7% of the previous core power" - blimey, that's 70 megawatts. You'll burn your hand on that for sure !

Hmm. I don't know how much fuel is in the reactor, but at present, 3 days after shutdown, you've got say 3 megawatts of heat still being produced - and presumably, given the hefty shielding around the core, not being lost easily.

OK, given no heat losses and a starting temperature of 132C, how much uranium could you melt in a day with 3 megawatts ?

27,665 joules approx to raise 238 grams of uranium from 132C to melting point 1132C. Note that this assumes the heat capacity stays the same over that 1,000 degree temperature range. It probably doesn't, but we're just doing some rough approximations.

Hmm. Given no heat losses and only uranium to melt, that looks like more than 2,000 tonnes a day ! I think a reactor has more like 50 tonnes in it. My maths may be awry, but if it ain't it certainly looks as if sans cooling a meltdown is not only possible, but likely.


UPDATE - reactor 2 goes pop. That's 1, 2 and 3 all had explosions. Those poor engineers must be sweating. Where's the nuclear Red Adair ?


UPDATE2 - the title is of course from Admiral David Beatty -

"It was at Jutland, after two British battlecruisers had blown up, that Beatty made his famous remark, 'There seems to be something wrong with our bloody ships today, Chatfield'"

All they have to do is keep pumping the water through, barring any major damage to the containment vessels, then there wont be a meltdown.

This soon after shutdown any halt in the flow of coolant will bring meltdown.

Thats what Ive gleaned in a day of reading on and off.

The reactor heat is falling off all the time as pointed out in post, so lets pray those guys can keep the water flowing. If they can then time is on their side.

So where did you learn the basics of SI, Laban?

The properties of uranium are beside the point - the fuel is uranium oxide.

Anon - we did Nuffield science at school, a long time ago.

Thank you for this excellent read!! I definitely loved every little bit of it. Cheers for the information.
This is the perfect blog for anyone who wants to know about this topic.
You know so much it's almost hard to argue with you
Pinoy Tambayan