Yazza, in her rightful home of the Daily Mail, not for the first time bemoans the female hierarchy of skin colour, as exemplified by the recent lightening of one Beyonce Knowles, apparently a popular singer renowned for her shapely rump (or 'booty') :

"Black and Asian parents work hard to give their children a positive self-image and confidence in their appearance, despite the cultural forces stacked against them. But when black celebrities appear to deny their heritage by trying to make themselves look white, I despair for the youngsters who see those images. " 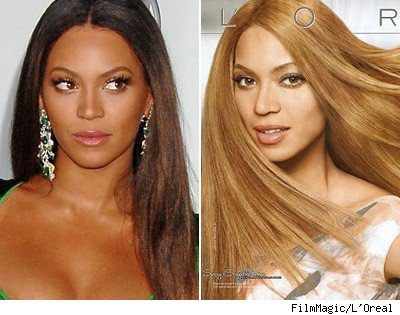 Hmm. She's certainly not getting any darker, although digital processing can do a lot of that. Mind you, at one stage of his life it was becoming increasingly difficult to tell Michael Jackson from Gloria Estefan. Beyonce has way to go.

I’m sure I’ve posted this before, but the anthropologist Peter Frost, in ‘Fair Women, Dark Men’, pointed out that paleness in women has been prized for centuries, even in cultures with little Western exposure such as medieval Japan – or ancient Israel.

“I am black, but comely, O ye daughters of Jerusalem, as the tents of Kedar, as the curtains of Solomon.”

Why ? Maybe because women do tend to have lighter skin than men, due to subcutaneous fat.

Frost notes that a preference for paler women will have the effect of lightening the upper classes in any society – as they tend to get the women considered most attractive.

“Since higher-ranking men marry the more attractive women, the upper classes tend to lighten in color with each passing generation, as in India.”

By contrast paleness in males is not prized – “tall, dark and handsome” is required. Aryan blonde males like Rutger Hauer or Max von Sydow tended to play bad guys. Note the stick Julian Assange is getting for his looks – remarks to the effect that he looks like a classic movie villain who should have a white cat on his lap. In movie casting, the love interest woman is nearly always lighter than the love interest man.

Graph of skin relectivity (i.e. lightness) vs age for men and women in India and Spain, showing that females in both countries have on average lighter skin than the males. It appears that lightness is associated with femininity both in fact and in culture.

While Yazza may actually have a (smallish) point here (she also gets into Black Dolly, White Dolly territory), she's also yet again invoking Sailer's Law Of Female Journalism :

"The most heartfelt articles by female journalists tend to be demands that social values be overturned in order that, Come the Revolution, the journalist herself will be considered hotter-looking."