Who would have thunk it ?

'Twas more than four years ago that I noticed Cathy Jamieson's campaign against anti-social behaviour didn't seem to be bearing the right sort of fruit. 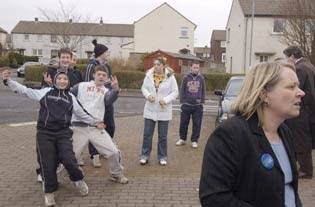 Now those wee neds are all grown up :

A man who became notorious for making a v-sign behind Scotland's former justice minister during a TV interview has been jailed for assault. Jamie Smith, 20, is the 25th person to be prosecuted for a gang attack on passers-by in Cumnock, Ayrshire. Smith from Auchinleck, was sentenced to six months in prison.

He was 16 when he was filmed making obscene gestures behind Labour's Cathy Jamieson as she launched a crackdown on anti-social behaviour.

Unlike Ms Jamieson's policies, our young "Superned" is bearing fruit :

The Record told in 2006 how Smith and his then girlfriend Lisa Wilson, both 16, were expecting their first child.

Oooh, looks just like my old estate in Slough.

At least tey have kids!1

A personal friend of mine's father was a Labour MP for a working class constituency.

Needless to say he doesn't live there anymore.

At least they have kids...

Im trying to put a brave face on this. If they are both white (and in Scotland thats highly probable) then they will have white children. Due to regression to the mean these white offspring should not be too far off average white IQ - 100.

The bad news is that their children will be brought up in the broken progressive culture around them (not that progressives think that it is broken of course).

The problem with black and black/white mixed children of the underclass is that they have the same crappy culture and the grim prospect of a less than IQ100. With all that entails for them and the society around them.

So even white chav/ned kids are a step in the right direction, at least there is potential there. There isnt any with those black and mixed kids.

Sorry to be mean but there it is.