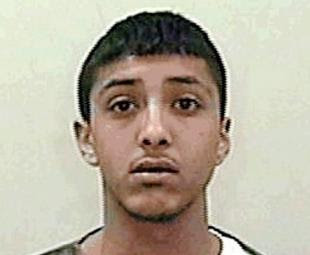 Amir Rehman, 18, shouted racial abuse as 51-year-old Ronald O'Connor walked to a shop for a loaf of bread, near the gates of Lister Park, Manningham, last December.

Leeds Crown Court heard that Rehman shouted: "Manningham belongs to Muslims. We dont want whites. We rule Bradford. We are going to get you out."

His victim tried to get in the shop, but Rehman ran towards him and stabbed him twice in the upper arm with a four to five-inch bladed knife. Rehman, of Manningham, tried to slash Mr O'Connor's face and the victim also had the palms of his hands slashed as he tried to defend himself.

Hmmm. On that evidence, and if the reporting is correct, Jonathan Devlin seems to be a man with exceptionally limited powers of analysis and deduction. I suppose there's a chance he's referring to the robberies of children rather than the racist attack.

Mr Gioserano said Rehman attended Bradford Crown Court for a preliminary hearing of the case in March, but went straight from court to Pudsey, with two other men, Amar Farooq and Tanveer Hussain, where, later in the day, they committed a series of robberies on children on their way home from school.