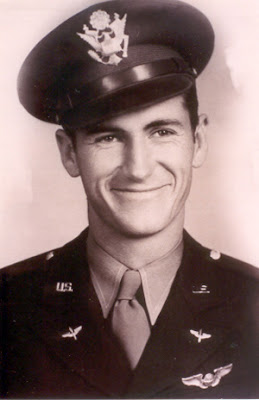 Relatives of an American Air Force crew whose plane crashed into a west Wales hillside in World War II have unveiled a memorial in their honour.

The bomber hit the slopes of Carn Llidi near St Davids in thick fog on 4 June 1943, killing all four on board. One of the aircraft's propellers, found on the hillside, forms part of the memorial at nearby Whitesands Beach.

The daughters of pilot Robert Lawrence and navigator Hulbert Robertson travelled to Wales for the ceremony. On Saturday - 62 years to the day of the crash - they were joined by civic and military representatives to unveil the memorial and plaque.

In late summer, 2003, while skimming through my hometown Texas newspaper, the Comanche Chief, I was surprised to see a name I recognized. A man in England, I read, had written in search of relatives of 2nd Lt. Hulbert H. Robertson, who served in the Army Air Corps in World War II. I knew that name well. Hulbert was my mother’s first husband, father of my half-sister Gwen. He died on June 4, 1943, when his B-26 Marauder crashed into a Welsh hillside. He was buried in the American Cemetery near Cambridge, England.

Gwen was not quite two years old when her father died, too young to remember him. My dad raised her and loved her as his own, but from early on I knew that my big sister and I had different biological fathers. Her daddy was the smiling young soldier whose picture hung on the parlor wall of his parents’ old dog trot cabin in the country near Comanche.

I knew he’d died in some war, and that it made people sad to talk about him, but they were proud of him just the same. As I got older and understood more I thought it was kind of tragically romantic. 2nd Lt. Robertson would remain forever young and handsome and brave, and those he left behind would have only happy memories of him.

Gwen grew up, married, had children and grandchildren. They knew, in an abstract way, that they’d had another grandfather, but he was just a young man in a photo to them, a part of history they knew little about. Now, out of the blue, someone, a complete stranger from another country, was asking about him.

She said she got a little shiver every day when she drove by the cemetery and thought about those boys, and she got a bit teary eyed as she talked about it. So did we. That would happen a lot during our trip.

Happens when you read about it too. Shirley Wetzel can write (and she knows Kinky Friedman).


One of my Welsh relatives spent many years investigating WW2 crash sites in the North Wales mountains. I was fascinated by the hardware he'd retrieved, and though the crews might be always in your mind as you hold a part of their aircraft, it's easy to forget the families changed forever by the death of their young men. There are photos of the visit here. And as well as Lt. Robert Lawrence, Flight Officer James Grady Jackson, 2nd Lt. Hulbert H. Robertson and Sgt. William "Billy" Brown, there's another hero in this story - the Port Talbot fireman and aviation history buff Steve Jones, who contacted the relatives, put them up at his place, and seems to have no Web presence at all.

More photos and more about the crash on the B26 Marauder site, including one with Mr Jones in it. I wonder if he wrote the text ? The stories on the site's guestbook are riveting.
Posted by Laban at 8:12 pm
Labels: history, the way we were

I was amazed and pleased to find this blog about my family's story. When we started this journey with Steve in 2004, we had no idea how much it would touch other people. Thank you for keeping the story going.