Allegedly. I'll let you be the judge.

A gay man accused of murdering his former lover by dousing him in petrol and setting him on fire has said his Muslim friend tried to frame him after finding out he was homosexual.

Nadim Kurrimbukus, 25, also known as Adam, denies setting fire to 23-year-old Charlie Davies outside his home in Templedene Avenue, Staines, at 11.20pm on June 14 last year. His co-accused Yusuf Dulloo, 27, said in a police interview he drove with Kurrimbukus to Mr Davies’ home on the same night and heard a scream after his friend had left the car, but he denied any knowledge of the attack.

But the following day they met at Hounslow train station where Kurrimbukus confessed to him that he “lit the guy”, Dulloo told detectives. Kurrimbukus, a former West Thames College and Isleworth and Syon School pupil, told Kingston Crown Court this week that his Muslim friend was lying to punish him after discovering he was gay.

Dressed smartly in a suit and tie and wearing glasses, he said: “In Islam you are not allowed to be gay. There’s such a thing as an honour killing. Dulloo’s lying as a punishment. He is trying to punish me after he found out about my sexuality.”

Hmm. I suppose it's worth a try. 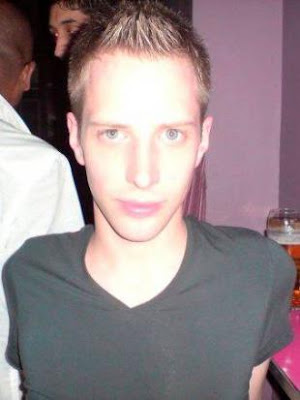 (the late Charlie Davis)
Posted by Laban at 9:20 pm
Labels: jobs the locals won't do, the way we live now

Anonymous said...
This comment has been removed by a blog administrator.
10:59 pm