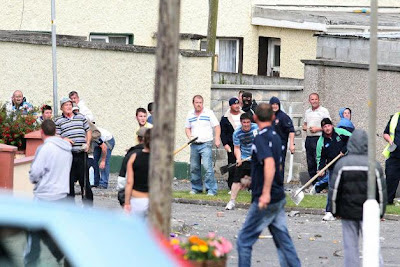 According to the Herald the guy in the stripy top with the beanie hat, one Christie "Ditsy" Nevin, is named as a leading instigator.

A senior garda named Christie "Ditsy" Nevin (53) as the man who has contributed most to the violence. Superintendent John Gantly, a former head of the Garda Emergency Response Unit, claimed Nevin had opposed all attempts at compromise in a long running feud between families. Nevin was charged with public order offences. Hugh Nevin (21), of Grange Crescent, Mullingar, and David Nevin (30) of St Michael's Park, Mullingar, were both charged with assault. Five others were also accused of public order offences. They were: John Nevin (25), of St Michael's Park; Paddy McDonagh (70), of Dalton Park, Mullingar; David McDonagh (26) of Reask Court, Navan, Co Meath; Michael McDonagh (36), also of Reask Court; and Michael McDonagh (24) of Northern Close, Belcamp Lane, Coolock, Dublin 17.

"The lad in the balaclava is with the Continuity Travellers"

Apparently after a prize-fight between two champions from the feuding families to decide on the 'king of the tinkers', someone didn't pay their gambling debts. Hence the house that was trashed. That's according to RTE.

George Borrow again, on the tramp through North Wales in 1854 :

We continued our way, and presently saw marks of a fire in some grass by the side of the road. “Have the Gipsiaid been there?” said I to my guide.

“Hardly, sir; I should rather think that the Gwyddelaid (Irish) have been camping there lately.”

“Yes, sir, the vagabond Gwyddeliad, who at present infest these parts much, and do much more harm than the Gipsiaid ever did.”

“What do you mean by the Gipsiaid?”

“Dark, handsome people, sir, who occasionally used to come about in vans and carts, the men buying and selling horses, and sometimes tinkering, whilst the women told fortunes.”

“And they have ceased to come about?”

“Nearly so, sir; I believe they have been frightened away by the Gwyddelod.”

“What kind of people are these Gwyddelod?

“Savage, brutish people, sir; in general without shoes and stockings, with coarse features and heads of hair like mops.”

“The men tinker a little, sir, but more frequently plunder. The women tell fortunes, and steal whenever they can.”

“Something, sir; but the hen Gipsiaid were gentlefolks in comparison.”

“You think the Gipsiaid have been frightened away by the Gwyddelians?”

“I do, sir; the Gwyddelod made their appearance in these parts about twenty years ago, and since then the Gipsiaid have been rarely seen.”

“By no means, sir; they make large sums by plundering and other means, with which, ’tis said, they retire at last to their own country or America, where they buy land and settle down.”

(If you think the English or Welsh are dubious about travellers, just ask an Irishman about them and get your ears pinned back)
Posted by Laban at 8:52 pm
Labels: ireland, travellers
Newer Post Older Post Home