After some particularly hideous crime or series of crimes you can usually rely on a pro-criminal or anti-prison campaigner to pop up repeating the famous liberal 'moral panic' mantra, the basic theme of which is Ecclesiastes 1:9. Worried about x ? Well, people were worried about x as far back as ccyymmdd, and the sky didn't fall in. (You won't be completely surprised to find that the actual evidence for x back in ccyymmdd is usually remarkably difficult to find - for example, try finding any hard figures for the number of people killed by "Glasgow's notorious razor gangs". I seem to remember reading somewhere that about two or three people were killed in a ten-year period - stats that the current gangs could knock off in a few weeks.) Given the current news, I'm surprised CiF hasn't found a tame criminologist from the University of Gloucester (formerly Tredworth Sports and Social Club) to tell us about Glesga razor gangs or quote Grahame Greene at us. Give them time.

A year or two back criminologist David Wilson of the University of Central England (formerly The Breedon Bar, Cotteridge) mentioned the hitherto unknown to me Garotting Panic of 1862.

The "garotting panic" was in reality a response to a new phenomenon that Londoners had to come to terms with: the return of released prisoners into the community, which until the 1860s had not been something that was often experienced, given that most offenders had in the past been transported to Australia. And, of course, if you were transported to the other side of the world in the 1840s, 50s and 60s there was little chance that you would actually return to your native city, and so offenders were out of sight and out of mind.

Very helpfully, the pro-criminal campaigning group (aka 'crime reduction charity') NACRO (National Association for the Care and Resettlement of Offenders) have produced a handy pdf of panics called The Dynamics of Panic, featuring contributions from anti-punishment activist Richard Garside and Professor Peter King of the University of Northampton (formerly Bellinge Community Centre) , who writes as follows - but first I must mention his opening line, which should give you an idea where he's coming from. Would you ever guess that "Pete" started life as a social worker ?

"Very few people have much direct experience of crime ..."

Well, would you believe it ? It's 2008 everywhere else, but in the King cranium it'll always be 1972. This guy is paid by the taxpayer to be an expert on crime. I read what he wrote - I read it again - and I still can't quite believe what's in front of my eyes. Bit like the good professor really - he obviously has the same difficulty.

The garotting panic of 1862

One of the best studies of this pattern (of moral panic - LT) is Davis’s work on the 1862 garotting panic (2) . On 17 July 1862, Hugh Pilkington MP was accosted after leaving the House of Commons. He was choked, struck on the head and relieved of his watch. In the parlance of the times, he was ‘garotted’. The press immediately began to fan the flames of panic. Two days later, the Spectator reported that ‘Highway robbery is becoming an institution in London and roads like the Bayswater Road are as unsafe as Naples.’

The press quickly built up a picture of garotters as ‘folk devils’. They were 'degenerate, coarse, brutal ruffians’, ‘a race of hardened villains’, ‘a species … of ... profound enemies of the human race’ and ‘an irredeemable criminal class’. Minor events were turned into garotting incidents. Indeed, some crimes were literally created by the panic. One unfortunate man walking home on a foggy night thought someone was following him and feared he was about to be mugged. He turned round and attacked his pursuer who was in fact innocently walking home the same way. This was reported as a dangerous mugging.

This panic was further fuelled by the police, who used it for their own purposes. They arrested many more men than usual as ‘suspicious characters and reputed thieves’ and expanded the definition of garotting itself. In one court case the police described a pub brawl as a garotting because they wanted the thieves involved taken off the streets. In another case, a policeman arrested John Boney Redwood for stealing £2, but also ‘imagined’ seeing him knocking his very drunken victim down. Redwood could see what was coming. ‘I know there have been a great many garotte robberies about’, he remarked, ‘and now you have me I suppose I must suffer for it.’ He got 10 years’ penal servitude rather than a few weeks in gaol.

Magistrates also tended to redefine minor crimes – such as pickpocketing – as garottings, and to send them on to the major courts. The result was a rise in reported violent street robberies, which in turn fuelled further panic. According to the metropolitan returns, the figure rose threefold from an average of 32.5 robberies with violence in 1860-61 to 97 in 1862. The increase came only after Pilkington was attacked on 17 July. Up to that date only 15 cases had been reported. The moral panic was not caused by an increase in garottings. On the contrary, the rapid increase in the number of garottings recorded was caused by the moral panic.

This ‘crime wave’ resulted in more policing, the redefining of minor crimes as more serious offences and tougher sentencing in the courts. It also helped to produce a number of legislative changes. An Act was passed which temporarily reversed the long-term movement away from corporal punishment by reintroducing flogging, along with imprisonment, for all robbery with violence. A year later, stricter sentencing policies were introduced in a further Act. The trend towards greater severity continued in the Prisons Act 1865 and the Habitual Criminals Act 1869.

The garotting panic served the purpose of the advocates of longer sentences, tougher prison regimes, and less freedom for those paroled under the ‘ticket of leave’ system (not to mention the return to flogging). These ‘moral entrepreneurs’ (Cohen) rode on the back of a media-created crime wave to get the changes they wanted.

The panic reached its peak in November. Following the trial of 23 alleged garotters at the Old Bailey, it gradually faded in intensity. It had lasted for less than six months. The consequences for penal policy were to prove far reaching.

(2) Davis J (1980) ‘The London garotting panic of 1862: a moral panic and the creation of a criminal class in mid-Victorian England’ in Gatrell V et al (eds) Crime and the Law. The Social History of Crime in Western Europe since 1500 and see Sindall R (1990) Street Violence in the Nineteenth Century.

Well. There you go. All that moral panicking - because one innocent man was killed. You wouldn't want to see something like that happen again, would you ?

Mr King, being a professional criminologist, is an expert at not seeing the wood for the trees. To stupid uninformed Laban, the key text is this :

Magistrates also tended to redefine minor crimes – such as pickpocketing – as garottings, and to send them on to the major courts. The result was a rise in reported violent street robberies, which in turn fuelled further panic. According to the metropolitan returns, the figure rose threefold from an average of 32.5 robberies with violence in 1860-61 to 97 in 1862. The increase came only after Pilkington was attacked on 17 July.

I don't know how you have half a robbery, but look at that. From 33 robberies to 97 - and apparently some of those are pickpocketing offences. In a year.

Let's take a look at the Met's most recent crime figures, shall we ?

Why go over all this ? Because in 2007 strangling strangers in robberies is hardly noticed. I don't remember any national TV or radio news about these killings at all. A few beers with mates, a stroll home from the pub - and death at the hands of predatory strangers. 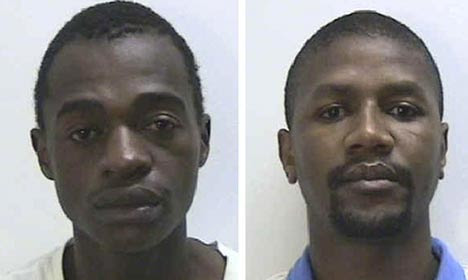 Two South Africans who robbed and murdered two strangers and mugged a string of others while living in the UK on expired visas were jailed yesterday for a minimum of 30 years each. Gabriel Bhengu, 27, and Jabu Mbowane, 26, used their brute strength to grab seven victims in suffocating headlocks before robbing them.

Both men were so strong that two of their targets died in the attacks, while two others told police they felt they were going to die as they were held in headlocks. Bhengu, at 6ft 4in the taller and stronger of the pair, usually grabbed their victims while Mbowane rifled through their pockets, the court heard.

Both are known to have entered the UK legally, but their visas had expired by the time of the murders last April and the five other muggings. Mr Justice Goldring recommended they be deported on their release from their sentences for the murders of Neil Williams, 41, from Telford, Shropshire, and builder Andrew Owen, 42, from Sedgley, West Midlands.

They were killed 20 miles and ten days apart in April last year. Both had been walking home from nights out when they were grabbed round the neck.

Police linked the murders after Mr Williams's watch was found close to Mr Owen's body. Detectives believe one of the killers had been wearing the watch, which had fallen off as Mr Owen fought for his life. Mr Owen - a father-of-five - died from neck injuries as a result of the struggle, prosecutor Roger Smith QC told Wolverhampton Crown Court. Mr Williams died of heart failure. His beige jacket, gold neck chain, bracelet, ring, watch and mobile phone had all been taken from him - but the muggers missed £950 in cash in his trouser pocket.

They were arrested in May last year after visiting a pawnbrokers to try to sell Mr Owen's jewellery. The trial heard the pair, living in Witmore Reans, Wolverhampton, initially targeted women laden with shopping before switching their increasingly ferocious attentions to men. They had admitted mugging Mr Williams and Mr Owen but denied intending to harm them or carrying out the other robberies. But they were convicted of the two murders on Thursday following a five-week trial and returned to Wolverhampton Crown Court yesterday for sentencing.

Kashia Allen, 22, Bhengu's girlfriend-drove them to the robberies. She was cleared of Mr Owen's murder but convicted of manslaughter. Bhengu and Allen, also of Wolverhampton, were found guilty on five robbery. Mbowane was convicted of four robberies. Allen will be sentenced later.

Outside court, Mr Williams's brother, Paul, 46, claimed Bhengu had been arrested and held in custody for two weeks in 2004 for a minor offence but had not been deported. "At that time he was an overstayer...they could have got rid of him then," he said. "Unless they put the system right it's going to happen again." He called Bhengu and Mbowane "cowards and parasites".