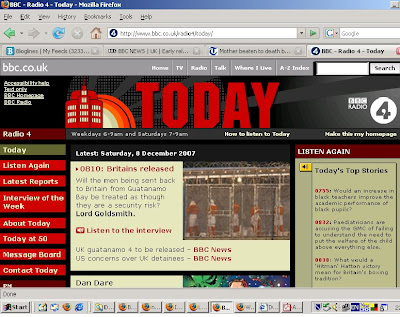 And who are these people to deserve the name of Britons anyway? Assorted so-called refugees from the Maghreb and the Middle East with apparent connections to people who want to kill us. Britons? Do me a favour!

Mr Greenwood obviously has access to a better news service than I can find. This new BBC story tells us that Shaker Aamer (who according to his lawyer was dying in January 2006) is a Saudi and that an Abyssinian, one al Habashi, remains banged up in Gitmo. But as I search the BBC stories :

for details of the nationalities of 'UK men' Jamil el-Banna, Omar Deghayes and Abdenour Samuer, I learn about their children and how they long to be 'home' for Eid, but nothing about their nationality.

In other BBC stories, "Concerns over Sudanese woman".