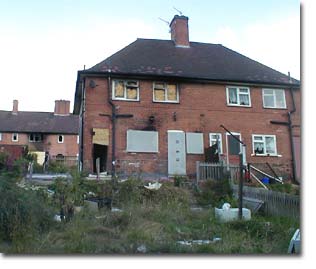 The brook ran under the alder-trees, scarcely soiled by these small mines, whose coal was drawn to the surface by donkeys that plodded wearily in a circle around a gin. And all over the countryside were these same pits, some of which had been worked in the time of Charles II, the few colliers and the donkeys burrowing down like ants into the earth, making queer mounds and little black places among the cornfields and the meadows. And the cottages of these coalminers, in blocks and pairs here and there, together with odd farms and homes of the stockingers, straying over the parish, formed the village of Bestwood.

Then, some sixty years ago, a sudden change took place. The gin-pits were elbowed aside by the large mines of the financiers. The coal and iron field of Nottinghamshire and Derbyshire was discovered. Carston, Waite and Co appeared. Amid tremendous excitement, Lord Palmerston formally opened the company’s first mine at Spinney Park, on the edge of Sherwood Forest. About this time the notorious Hell Row, which through growing old had acquired an evil reputation, was burned down, and much dirt was cleansed away.

The Bottoms consisted of six blocks of miners’ dwellings, two rows of three, like the dots on a blank-six domino, and twelve houses in a block. This double row of dwellings sat at the foot of the rather sharp slope from Bestwood, and looked out, from the attic windows at least, on the slow climb of the valley towards Selby.

Bestwood is a 'village' smack (le mot juste) in the middle of what was DH Lawrence country - the mining villages to the north of Nottingham. In 1896 it was described as a 'busy centre of industry', characterised by 'the shriek of the locomotive whistle and the rattle of the hosiery frames'. Lawrence called the village where the Morel family lived in 'Sons and Lovers' Bestwood, although I'm not sure whether he was anonymising his home village of Eastwood.

The colliery closed in 1967. The Bestwood Estate, a typical Midlands postwar council estate of solidly-built semis, underwent the social and cultural changes you can see from the Durham and Northumberland coalfields through West Yorkshire to the Valleys, the other side of the Glorious 60s Revolution so acclaimed in liberal England.

Suffice it to say that Bestwood has the Youth Project, the "Centre in Bestwood incorporating Family Learning, Adult Learning and Resources and a Children’s Centre", Surestart, Bestwood Directions ('In Bestwood there are no longer any children on the child protection register' - are they all in care ?), the Healthy Living Centre etc. Operation Kingdom, a multi-agency policing and neighbourhood management initiative, is working to improve the quality of life on the Bestwood Estate.

In other words, all sorts and conditions of social worker and funding stream is washing around this smack-ridden disaster zone.

But the Bestwood boys and girls seem to be caning it a bit even for a disaster zone. Today I noticed this BBC news story.

Police have described the arson, on Friday evening, as "a deliberate and malicious attack".

The lit firework was pushed through the letter box just after 2100 GMT, three men were seen by the occupants running away from the house in Raymede Drive on the Bestwood Estate.

Two men, aged 17 and 23, who were inside the property, chased after the attackers who ran across Paddstow Road and Southglade Road.

But in the ground of Southglades Leisure Centre the three attackers were joined by another four men who attacked the two from the house.

They suffered cuts and bruises in the assault. They managed to escape and ran back to the house to find it gutted by fire, police said.

A third man, aged in his early 20s, who was upstairs in the property managed to escape.

Raymede Drive ? That name rang a bell. Wasn't it there that there was rioting after the verdict was announced in the Stirland murder trial, so well described by the Policeman ?

Six people have been charged with violent disorder after police were attacked with petrol bombs on a Nottingham housing estate.

Officers said up to 30 people set fire to cars and skips and vandalised fences on the city's Bestwood Estate.

It is understood the protest was linked to the jailing of three Nottingham men who plotted to murder Joan and John Stirland at their bungalow in Lincs.

About 200 officers were called in to the disturbances on Saturday night.

Prosecutor Stuart Rafferty told the court that the group were caught on camera ripping up fences, knocking down walls and building barricades across Raymede Drive.

They were filmed hurling abuse at police, setting fire to cars and chanting about a miscarriage of justice.

Their motivation, he said, was the conviction of three men for conspiring to murder Joan and John Stirland at their bungalow in Trusthorpe, Lincs, in August 2004.

Mr Rafferty said: "It is perfectly plain that the over-riding motive of those who orchestrated this and took part was to make public their displeasure at the recent conviction of the men for conspiracy to murder and the very lengthy imprisonment they were ordered to serve."

Mr Rafferty said the group, led by New and the 34-year-old woman, shouted instructions to the others in the group, ordering the setting of fires and the building of barricades.

A crate full of unused petrol bombs was later discovered by police abandoned in an alleyway on the estate.

"The people on the street were volatile," Mr Rafferty said. "However, some of them were demonstrably enjoying every moment. There was a group elation at what was going on."

The group, led by the two ringleaders, marched up and down the street, calling for the release of the three men through a megaphone. The pair also threatened further outbreaks of violence unless the men were released from jail, the court heard.

I did a bit more digging. Well blow me down. This is only available in the cache so I'd better post the whole thing. Using the Compose' format gives a pretty good clone of the page. I wonder for how long the Fire Services have been handing out useful tips to householders on protection against arson ?

According to Nottinghamshire Fire and Rescue Service in August 2004 - way before the Stirland convictions - "there have been over 200 arson attacks in the last 12 months alone in just three streets in Bestwood – Raymede Drive, Leybourne Drive and Andover Road".

200 arson attacks in a year ? In three streets ? No one apprehended ? What the hell is going on on that estate ?

Posted by Laban at 8:59 pm
Labels: underclass, you get what you pay for

“Fire damaged houses are an eye-sore in an otherwise popular area..."

^ Popular with the people who set the houses on fire, silly.

If the link doesnt work the go to www.thisisnottingham.co.uk and it's under the headline Victim Still Unconscious 27th Nov