And next time I hear someone say:- "He'll come out of prison one day - it's us that are serving a life sentence", I shall throw up. - The Magistrate's Blog.

"I'm not happy with the sentence, the realistic sentence. He got what I see as a short sentence but Hayley has got a life sentence - his face is always going to be there." - emotional claptrap from the new partner of Hayley Cooper.

A man who stabbed a woman nearly 30 times has been sentenced to life in prison by a court. Mark Antony Oldfield, 32, from Devizes, Wiltshire, knifed ex-girlfriend Hayley Cooper 28 times, near Salisbury, on 14 September last year.

Salisbury Crown Court heard how Miss Cooper, 23, had to undergo life-saving surgery after the attack.

The sentence passed means Oldfield is subject to lifetime parole but he could be out of jail in as little as two years, the court heard.

The judge reduced Oldfield's actual jail term from nine years to six to give credit for his guilty plea.

Oldfield, who has a string of past violent convictions, will serve half of the six years inside, minus the 269 days he has already served on remand, after which he can apply for release on parole.

Oldfield is 32 - an age at which through most of recorded history a man has been considered an adult. Take a look at him. Alternative or what ? 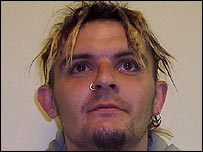 The great glory of the welfare state and the sexual revolution is that adolescence for males has been extended from its ancient bounds of 15-20 to something like 13-40 - indeed for some beyond that. In ancient days (the Golden Age that never was) the disciplines of work and marriage subdued man's natural tendencies to naughtiness of all kinds. No work meant no food - and perhaps more important for socialisation, no respect from your peers. It also meant no marriage - and no marriage meant no sex - unless you were wealthy, lucky or unusually desirable.

Now in many parts of the UK respect is measured in mohs - the harder the better. Reliable contraception has removed the link between sex and childbearing - and if a pregnancy results and the child hasn't a club foot, Daddy State will raise the child - to the great approval of Polly Toynbee, the Joseph Rowntree Foundation, the children's charities and all right-thinking people. No need for a hubby to work for his family - Sure Start and Gordon Brown can do a much better job.

In the meantime, men are free to express their inner creativity - as Mark Oldfield did. Bounds ? Of course we know no bounds.
Posted by Laban at 2:31 pm

How in god's name can the BBC say that this head case been 'sentenced to a life in prison' if he's eligable for release in a little over 2 years? The mind boggles.

"But Oldfield attacked Miss Cooper while high on drugs and drink on Salisbury."

I'm shocked to find that drink & drugs were involved....

To give someone "a life sentence" which is actually 6 years before automatic parole is a sick joke. The judiciary are sneering at us, it's ridiculous.

The concept of a "life sentence" should be abolished, it is completely meaningless. How is anyone supposed to have any confidence in the CJS when this sort of deception is going on?

I dont wish to pick hairs, but Oldfield will do 6 years before he is even considered for parole. As far as I'm aware 99% of 1st parole bids are rejected. The problem here is that someone outside the official system has to keep an eye on his position within the prison system as it is always a possibility that he could become one of the 1% which obviously would need publicising and then condemming

In this case like all the other life sentences passed. Life should mean life. We could all live a lot easier if that was the case

He should be doing a serious stretch. Its a miracle the girl lived.

First you get Sidney Silverman to put forward a Bill for Roy Jenkins to abolish the Death Penalty. That Death Penalty which was vested in The State in place of Lex Talionis.

Then The State reneges on its duty. Then by degrees it reduces the capital nature of Murder and soo we are speaking of what murderers do after serving their "life sentence"

The gradual way in which the Absolutes in human living have been relativised is fascinating. We abort the unborn, but resurrect those who take life.

The world we live in is one of our own creation