Charlie Gilmour - The Gift That Keeps On Giving

Julia is a very perceptive woman. She commented yesterday :

"Well, good grief! The BBC News just ran an interview with Charlie Gilmour, made on the day, before they knew who he was, or what he'd done, and it's pretty clear he's either functionally retarded, or was drunk or stoned at the time."

Not found the BBC video, but take a look at this. He certainly seems to be off his face.

"Forward, break the lines, forward unto death !" With a heroic effort Laban refrains from the obvious response.


Julia : "No doubt Daddy's PR team wrote that statement for him..."

The Mail story also quotes a "friend" - presumably some Facebook friend - as follows:

"Charlie was on acid when he ripped the flag at the Cenotaph. He boasted about being on drugs on his Facebook afterwards but later took down the posts about acid."

UPDATE - you can see how remorseful he was about the trouble at the demo : 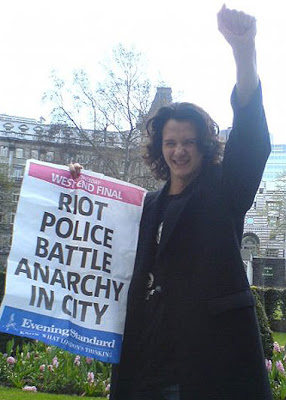 A friend wrote on Gilmour’s Facebook page: “That is you climbing the flag, yes?”

Gilmour replied: “No. Not me. Someone else.

The pal wrote, “My mistake” – to which Gilmour replied: “My big f***ing mistake.”

UPDATE - this photo from the Mail today - obviously not someone who was looking for trouble. The rock is just a pose and the latex gloves aren't at all the sort of thing you'd find useful when you're doing some 'free shopping' ... 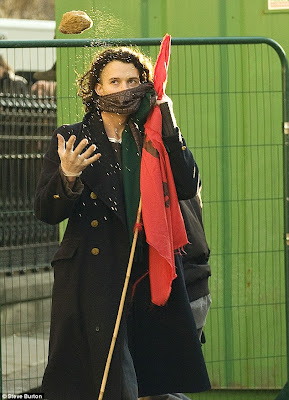 "Charlie Gilmour has admitted being close to the car carrying the Prince of Wales and the Duchess of Cornwall when it was ambushed by paint-throwing demonstrators in Regent Street. At 8.10pm, less than an hour after the attack on the Royal limousine, he was filmed by the BBC outside Topshop in Oxford Street, half-hiding a woman’s lace-up boot under his coat."

"Another picture showed him apparently trying to light a fire by the doors of the Supreme court on Parliament Square. " 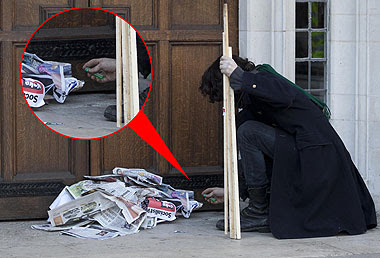 Why on earth didn't Chief Inspector Michael Walsh, one of whose officers stamped out the fire, arrest the twisted firestarter? 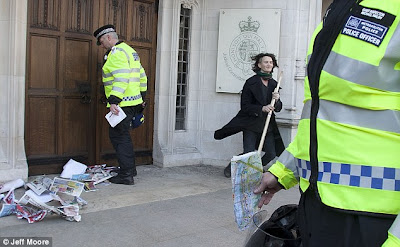 Not that I can't understand the appeal of smashing other people's things up as part of a mob. The sound of breaking glass has an appeal to young men of all classes. It's because it's such fun that we have to have strict laws against it.
Posted by Laban at 12:31 pm
Labels: pointy heads, publicans, UK politics

The 1st Earl of Cromer said...

But don't be too hard on him - after all, these people are the future!!!

We should all be delighted to pay additional tax so they can spend 3 years taking drugs, desecrating public monuments and assaulting police officers.

Seriously though, if this is the calibre of a Cambridge student, can you imagine what some of the others are like?

I think he's made, in his own way, a very strong case for scaling back the university system in this country.

If he's that bothered I'm sure Daddy could sponsor a few of his mates out of the petty cash.

"I think he's made, in his own way, a very strong case for scaling back the university system in this country."

But our Knowledge economy, all hope for the future, depends upon his like

We don't need no education ...

blueknight said...
This comment has been removed by the author.
9:55 pm

I feel rather sorry for David Gilmour. He generously adopted Charlie, after he married the little turd's mother.

On the 13th June 1944 my father dropped behind enemy lines South East of Siena, near Montepulciano. He was part of a LRDG patrol, M2, assigned to gather intelligence about German troop movements during the allied advance through Italy. That Friday the 13th drop was inauspicious: German troops swarmed the area and shot and captured a number of the patrol. My father evaded capture and made his way back to Allied Lines by following the River Arno and living off the generosity of Italian farmers (at great risk to them). He managed to gather some intelligence on the way.

“I was very fond of him because he had great charm and a glorious sense of humour. He was essentially straight and open. He also had an impertinent disregard for authority, but was wise enough to know that it was important to keep just the right side of it. Outwardly he had a light-hearted and carefree attitude to life, but this façade hid a wisdom and intelligence unusual in one so young. We could ill afford to lose such a fine officer”

He was 23 years old, 2 years older than Charlie Gilmour. He is one of "The Glorious Dead" commemorated st the Cenotaph.

They shall grow not old,
As we that are left grow old.
Age shall not weary them,
Nor the years condemn.
At the going down of the sun,
And in the morning,
We will remember them.

We will remember them.

Just for clarity: f*** Charlie Gilmour. He is not worthy to lace the boots of my father's generation.

Quite so, Dr Cromarty.

Each year the legion send a wooden cross for inclusion in the garden of remembrance, and the only thing that ever comes to mind to write on it is "Sorry".

He's going to need one of those Saville Row suits for a court appearance, I think.

Looks like daddy's lawyers are going to be coining it in in the next few months.

Dalrymple is back on form in this short article prompted by the antics of that odious little shit, Charlie Gilmour-

Young Charlie's biological dad, incidentally, is Heathcote Williams, something of a counter-cultural icon in the 70s and, being an Old Etonian, doubtless well versed in public school twattishness.

this kid is getting too much attention. it's not like he killed anyone, he's just a silly boy.
also they don't have evening standard west end finals any more and demo wasn't in the city so that picture must be old.
shall we move on?