Imagine a part of the US where black children routinely skipped school on Thanksgiving Day in case they were shot for attending on a day of 'white celebration'. It would be all over the Guardian and BBC like a rash.

In 2005, widespread fighting between Latinos and African Americans, sometimes necessitating lockdowns and the deployment of police officers, rocked 12 schools in Los Angeles County....

Channa Cook, a teacher at the Los Angeles Center for Enriched Studies, said that even in her school, routinely regarded as one of the best in Los Angeles County, black students each year skip school on May 5 -- Cinco de Mayo -- the day when Mexicans celebrate a 19th-century military victory over France. Mexican gangs have warned in graffiti that they will shoot African Americans attending school that day.

"Large swaths of Los Angeles, such as Watts -- a place that Earl Paysinger, the deputy chief of the Los Angeles Police Department, described as an "ecosystem for African American culture" -- are now increasingly Latino. The nearby city of Compton, the birthplace of gangsta rap, is now 60 percent Hispanic. "The movement of Latinos into these communities has been nothing less than a demographic earthquake," Paysinger said."

I remember even fifteen years go arriving in Chicago and being amazed at the number of Mexican immigrants - having to use my holiday Spanish in a bar to be understood.

Lunatics - "We Run The Asylum Now"

"Around 100,000 A&E consultations each year are linked to self-harm. Experts say many more people may be practising the technique in secret."

I like "the technique". Just as we're on the way to the medicalisation of criminality ("a serious personality disorder") and the human condition ("depression"), we now see cutting holes in oneself as a form of therapy. How long before cutting holes in other people is treated likewise ?

As Dalrymple recorded a patient saying, "I had to kill her, Doctor - or else I don't know what I'd have done".

In line with the spirit of this post I suggest that the "technique" be videoed or put on a live Web feed. I'm convinced there's a market for that sort of thing among the Zoo and Nutz generation.
Posted by Laban at 8:33 pm 2 comments:

"The spending splurge on education is a serious challenge to the Tories — and it puts the sterile education bill arguments about the structure of the school system into perspective. Who really cares about the precise role of local education authorities if we're chucking cash at schools?"

It's a pity IMHO that they don't raise the amount per pupil to 8K (the same as average private school fees) immediately. Then we could see the poverty of the 'cash gets good results' argument in all its glory.

I write as a (state-educated) parent with two children at comprehensive and a third in year 6 primary, who with heavy heart and light wallet is mulling over an acceptance letter for him from a local school. Whose fees are, by strange coincidence, £8,000 a year.
Posted by Laban at 7:15 am 7 comments:

Thanks to the Rotty Pup for this one. From the artist's illustration of the trial usd by the BBC it appears that she was killed by a white guy and five of an ethnic minority new to me - the grey men. 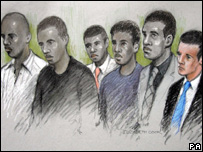 Come to think of it, wasn't John Major from Brixton ?
Posted by Laban at 7:18 am 7 comments:
Labels: BBC bias

I have little time for the Probation "Service", an organisation staffed mainly by frustrated ex-hippies with shaved heads, piercings and a bag of skunk in the back pocket. Guardian readers to a man - or these days, to a woman.

But for once they don't take the lion's share of blame for the fact that the four psychotic killers (one an illegal immigrant) who butchered Mary Ann Leneghan were on the streets. Step forward Britain's judges and magistrates.

Thomas, the gang leader, was on an 18-month community rehabilitation order imposed in November 2004 for possessing a Class C drug and possessing a bladed article. In April 2004 he had been given a community sentence for possessing heroin, cocaine and cannabis and a year earlier a referral order for possessing cannabis. Johnson, the most violent member of the gang, had a criminal career stretching back to when he was 13.

In 2001 he was convicted at the Old Bailey for abducting a 13-year-old boy with learning difficulties, hanging him upside down from a tree and beating him. He was sentenced to 3½ years’ detention.

In May 2002 he was given a conditional discharge for assaulting a fellow care home resident, and in July 2003 an 18-month detention and training order for assaulting two minicab drivers, affray and possessing a broken bottle.

A week before the murder he was given a community punishment order for possessing a Class C drug and assaulting a police officer.

If I remember correctly, the 13 year old boy didn't have any learning difficulties - until Johnson and an older boy nearly killed him. I think we're talking about this story - and I think Johnson, who stabbed Mary Ann to death, is the 13 year old. Mary Ann wasn't the first person he tortured, but good old Mr Justice Grigson ruled that he shouldn't be named.

Thirteen-year-old Michael Servante was returning from school by train when two youths, 13 and 14 at the time, took him to a building site in south London where they tortured him.

Michael's mother, Leisha Servante, said that she believed the courts should name juveniles who hurt other children.

"I think society has a right to know who we are living next to. They have been protected. We have not."

Mr Justice Grigson said: "To name them would be a very real risk to the progress that they have made and that would be detrimental to the long-term public interest that two young men should be rehabilitated."

Great progress, judge - a year later he was assaulting people. And a year after that. Chalk one to Justice Grigson.

"They were not on early release" says Judy McKnight, taking time out from the really important issues like taxpayer-funded pensions (better than anything in the private sector), or gender equality duty, to deal with those tiresome people who pay the wages.

But the Mary Ann Leneghan Memorial prize has to go to the unknown magistrate who sat in judgement on Thomas just a week before the murder. With two sentences already under his belt, he was charged with possessing drugs and asaulting a police officer.

Which genius magistrate thought community service was a good idea ?


UPDATE - for a realist view of community sentencing and the Probation Service, I recommend the briefing papers at the Crime and Society Research Association. Start with this one.
Posted by Laban at 10:08 pm 4 comments:
Labels: Mary-Ann Leneghan

"I run a company that's in the market for lots of lucrative Government contracts. Would you care for a large sum of money ? No obligation, of course"

"Why, thanks, don't mind if I do. No obligation, quite. In any event, all Goverment tenders are handled by John Prescott's new budget troubleshooter, so influence is out of the question"

"I'm being investigated by the Serious Fraud Office. But that's no reason not to lend you the odd million, is it ?"

How Did I Miss This ?

An unqualified accountant who hid his criminal past has been jailed for four years for stealing almost £1m from John Prescott's department.
Robert Adewunmi, 32, lied about his qualifications to work for the Office of the Deputy Prime Minister.

He was hired as a 'trouble-shooter' in the Budget and Data Management Division. Words fail me. Controls seem to have failed them.

Judge Christopher Hardy said the father-of-two had masterminded an "audacious" fraud on a large scale.

"Sadly it is yet another example of a public body being plundered by a dishonest employee in a position of trust, on this occasion the Office of the Deputy Prime Minister," he said.

"Of course it was not the deputy prime minister's money you stole, but money entrusted to him by the public, the taxpayers, and it was certainly not meant to satisfy your greed and lavish lifestyle to which you and your wife soon put it."

Entrusted to him ? Don't you mean 'taken under the threat of imprisonment' ?
Posted by Laban at 7:08 pm 2 comments:

... pro-life blogger Fiona Pinto - a link via Gardjola to a pro-baby march in the US - and their "pro-choice" opponents.

"I have studied the eyes of the fanatics who regularly picket abortion clinics in the US and I do not see love of tiny unborn babies. I see hatred."

Have a look at the photographs and make up your own mind.
Posted by Laban at 6:21 pm No comments:

A Couple of Moorhens On the Curate's Pond ...

A couple of weeks ago police blogs all over London were closing down, following the fatwa by the Met against them.

On one of them I picked up an RSS feed, the source of which had vanished by the time I looked at the actual blog. It said that word on the Met street was that 'Sir' Ian Blair's days were numbered.

Although he has his defenders, it does start to look that way. How ironic for the PC Plod if it's the testimony of Commander Hugh Paddick that does for him.


Here's an interesting one.

"Parents can say that they are drug-free and in the absence of objective evidence, it is difficult for us to prove to the contrary," she said.

"We all need to think about how we get the balance right between the rights of parents and the state's duty to intervene to safeguard children and their wellbeing."

Professor Neil McKeganey, director of Glasgow University's Centre for Drug Misuse Research, said that too much emphasis had been placed on looking after addicts rather than how they were looking after their children.

You'd need to build rather a lot of care homes, given that the majority of underclass mothers do drugs of one sort or another. On the other hand, poor little Derek Campbell would still be alive.

The only other issue is one of frying-pans and fires. Taking the child away from a drug-taking mother and delivering him or her to social services seems a bit coals to Newcastle. In my salad days I knew a fair few social workers, including some working in residential care homes. From that admittedly limited (although thoroughly researched) sample, I'd suggest that they'll need to test the social workers too.

another tremendous triumph for our hardworking Probation "Service".

Four of the gang were on probation at the time of the killing in Reading, Berkshire, it has been revealed.

Home Secretary Charles Clarke said it was "vital" lessons were learned. Sentencing was adjourned to 28 April.

Drug-dealer Adrian Thomas, 20, of Battersea, and fellow gang-members Michael Johnson, 19, of Southfields, Jamaile Morally, 22, of Balham, and Krasniqi were all under supervision when the 16-year-old was stabbed to death and her friend shot in the head in May 2005.

As Drinking From Home points out, Charles Clarke says that every time someone's killed by a probationer or early releasee.
Posted by Laban at 5:19 pm 1 comment:
Newer Posts Older Posts Home
Subscribe to: Posts (Atom)