As reported by the BBC.

"Muslims in the UK are more likely to identify strongly with Britain and have confidence in its institutions than the population as a whole, a poll suggests.

The survey says they are also more likely to take a positive view of living side-by-side with people of different races and religions.

Fifty-seven per cent of the Muslims polled said they identified strongly with their country, compared with 48% of the general public.

Nearly three-quarters of the Muslims said they felt loyal to the UK, and 82% said they respected other religions.

But just 45% of the wider population said Muslims living in the UK were loyal to the nation, and only 55% said they were respectful."

Huzzah ! These guys are more British than the Brits ! As Sunny at Pickled Politics put it "that should shut up some of the usual racists". The Times sub-editors titled Michael Binyon's piece "Muslim, British and just like the rest of us".

Call me an old cynic, but this seemed a little too good to be true. Just before elections, too. I wondered if that poll, (if reported accurately), may have been telling a different, deeper story. We have three slightly ambiguous sentences in the BBC report.

"Muslims in the UK are more likely to identify strongly with Britain" is upfront - no figures given. But fewer and fewer native Brits identify with the UK, instead identifying with England, Scotland or Wales (Northern Ireland is an exception, half identifying as British, half Irish). An unintended consequence of devolution.

"Fifty-seven per cent of the Muslims polled said they identified strongly with their country, compared with 48% of the general public."

Hang on - what's "their country" ? Britain, England, what ? People of recent immigrant stock, the overwhelming majority of whom live in England, have tended to identify as British rather than English.

It turns out that, as reported by Foreign Policy, which seems to have the fullest coverage, it is indeed Britain we're talking about. 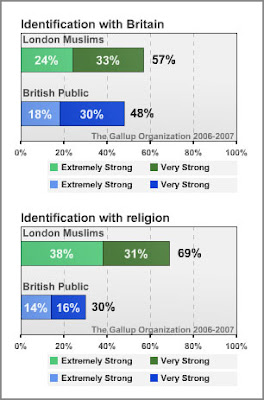 "Nearly three-quarters of the Muslims said they felt loyal to the UK, and 82% said they respected other religions.

But just 45% of the wider population said Muslims living in the UK were loyal to the nation, and only 55% said they were respectful."

Hold on a minute. Where are the comparison figures for 'the wider population' ? We don't get them. Instead we get what the wider population think of Muslim loyalty. So we don't know how the BBC derives its 'more loyal than most' headline. Alas the FP report doesn't feature the 'loyalty' figures - but if the BBC are reporting correctly, and we're talking UK, the poll may be telling us as much about the fracture lines within Britain, expressed as an increased loyalty to the constituent nations, as it does about Muslim loyalty.

(The report was apparently due to be released Wednesday, but I can't find it on the Gallup site. Anyone know where it is, or who commissioned the poll ?)

UPDATE - thanks to commenters who point out this David Conway post at Civitas :

I think there is very good reason to doubt the impartiality of those responsible for devising and for interpreting the poll, and hence to mistrust any claims about what it supposedly has revealed about the opinions of Muslims.

The reason to mistrust the impartiality of some of those connected with the poll is that, as stated on its own website, in developing and analysing data from the World Poll, the Gallup Organisation has relied 'on a panel of world–renowned scientists … [who] include John Esposito'. Now, John Esposito, as I explained in a related posting about the Gallup poll in February, is the founding Director of the Prince Alwaleed Bin-Talal Center for Muslim-Christian Understanding at Georgetown University in Washington DC which changed its name to its present one, after his university where it is based received a gift of $20 million from the man to whose name his centre changed its own.

As I reported in my posting about the Times' encomium of Ken Livingstone last week, this Saudi benefactor is known to be someone who is prepared to use his fabulous wealth and great influence to shape world-opinion in a way favourable to Muslims in general and to the Saudi Wahhabi regime in particular. He also happens to be the single largest share-holder in the holding company that owns, among many other news-media, ... the Times.

If Taqiya was explosive, we'd be able to take out the Channel Tunnel with that report.

Melanie Phillips has some info:

I think we can all relax now that this dose of reality about the wonder of Muslim love for Britain has been administered.

What a crock! I can understand the BBC lapping up this crap but the Times, at least, has some pretensions to purveying elements of disinterested fact.

but I can't find it on the Gallup site. Anyone know where it is, or who commissioned the poll ?


I read in a Times article that Gallup had paid for it itself...!!!

The findings, to be revealed tomorrow, are the result of an independent survey of Muslim attitudes by the Gallup Organisation,

The thing that strikes me about this is that there is no description of quite what Muslims mean when they profess loyalty to "Britain".

For example, to me, loyalty to Britain would include a substantial degree of identification with traditional British culture. Do Muslims do this? I strongly doubt it. I don't see how they can, given the extent to which British culture has always been bound up with Christianity.

But if you remove the question of a nation's culture from the definition of what that nation is, as the multiculturalist left seeks to do, then you don't really have a lot left. All that you do have is some notion of the country, which presumably amounts to little more than the geographical boundaries of the country, together with the fact that it has one central government. Loyalty to such a thing is largely meaningless, and does not mean that the Muslims will not continue to seek to impose their own way of life. Indeed, I would imagine that their identification with and sense of entitlement to "Britain" as understood by them means that they are more likely to seek to Islamify the country.

What's going to happen when the UK ceases to be? I see trouble ahead.

I'm always interested to know what exactly "British" means.
There are various contexts: "Caesar's landing was vigorously opposed by the British tribes" ... "In the year 1080, the British Church" ... "The Welsh are held to comprise the true British, the inhabitants of England being generally regarded as Saxons" ... "British Railways" ... "The British Army in 1914" ... "I say, old chap, that's not very British, is it?" ... "Ach, der British vill soon be defeated, eh, Fritz?" ..."Biggles is a typical British pilot" ... "British folk-music is full of sterling good tunes" ... "Hereward the Wake led the British resistance" ...
I can't imagine which of those would fire our Moslem friends' imaginations, or win their hearts and minds (just struck me, that phrase derives from the Anglican liturgy).
I suppose one way of winning them over and confirming their Britishness would be to conduct a conversation thus: "Hi there, Abdul, coming down the boozer for a few lagers and some pork scratchings? Just look after the dog for a second - that's right, tickle his tummy!" to which Abdul will, it is to be hoped, reply: "Ooowoo, yes man, and I will bring my wife - she likes vodka a lot! we are circumcising my daughter after prayers tomorrow, Ted - would you like to come and help the imam? Please bring that Elgar CD I so much enjoyed: we will need to drown her screams." "Great, Abdul! I met old Mohammed at early morning communion yesterday - he was helping with the chalice..."
I suppose the bloke to ask about all this is PRINCE CHARLES who seems to want to set himself as a syncretic panjandrum. "Fid. Def., 12th Imam, Divine Emissary of the Inner Light, Friend of our Silent Green Brethren, Huntsman of the Green Welly, Pillar of Fidelity"

If, as Laban suggested, increasing numbers of those of native stock are identifying as English/Scottish/etc. rather than as British, then the reports findings are scarvely surprising.

It also allows a group to self-report on its desirable traits, which is a glaring methodological fault. If someone comes up to me in the streets and asks if I'm a thief, I'm extremely unlikely to say yes, even if I actually am. Similarly, how many would respond to the question "are you loyal to this country?" in the negative?

The sensible thing to do when compiling crime stats is to look at crimes reported rather than go around asking people if they are criminals. Equally, if we want to find out if a group is "loyal" or not, we should judge by their actions (7/7; setting up of ethnic schools; hookie all spring to mind), not their words.

Finally, Britain isn't a nation anymore, atleast officially it isn't anything that can be recognised as one. It is a machine for the transference of money and opportunities from native whites to Asiatic immigrants via affirmative action and welfare programs. England can probably yet be saved, perhaps by deporting all these lovely invaders to join those perpetual ethnic-grievance mongers in Scotland and Wales.

For example, to me, loyalty to Britain would include a substantial degree of identification with traditional British culture.

Funny because for me it would mean identification with British history

I reject the prevailing culture as non-British, imported mish-mash and consumerism.

British identity rests in the common history of defeats and victories and knowing the Anglican Prayer Book and Rudyard Kipling; in knowing why Dunkirk was a victory and Singapore 1942 a defeat; in knowing why Oliver Cromwell was great and Charles I dignified only on the scaffold

Malplaquet, Plassey, Waterloo were defining moments in history and Cecil Rhodes - these were Great Britons. If you cannot acknowledge them as movers of empire you have no basis calling yourself British

Funny that we should be having this debate in the tricentenary of the union.