We're Not Having Kids - Again

"Three consequences get far less attention than they deserve. The first is the death of sisterhood: an end to the millennia during which women of all classes shared the same major life experiences to a far greater degree than did their men. The second is the erosion of "female altruism," the service ethos which has been profoundly important to modern industrial societies—particularly in the education of their young, and the care of their old and sick. The third is the impact of employment change on childbearing. We are familiar with the prospect of demographic decline, yet we ignore, sometimes wilfully, the extent to which educated women face disincentives to bear children."

For the death of female altruism, you don't have to look much further than the nursing profession, where on-the-job training has been replaced by academic training (contining a hefty chunk of political indoctrination) run by the likes of Tom "Too Professional to Care" Murray.

And childbearing ... it was interesting to look at Nordish's snaps of the demos in Liverpool and Blackburn against the lovely Condi.

Scallyland seemed to have a lot of people of my age out on the streets. 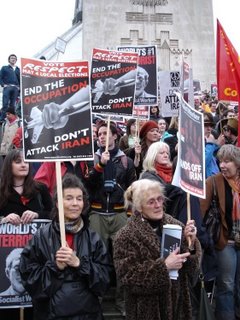 Blackburn was a little different. 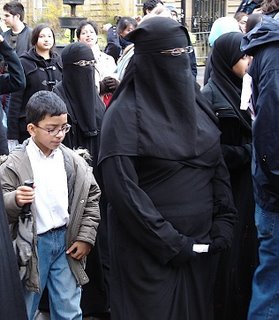