Today, officials estimate, the city contains an astonishing 70,000 abandoned structures—many of them houses, but also some commercial properties. In downtown Detroit alone, a local newspaper identified 48 office buildings with “no outward sign of life.”

That’s not surprising, considering how many people have fled Detroit over the decades. Over the last half-century, the city’s population has shrunk by 50 percent, from about 1.8 million people to fewer than 900,000. Since 2000, the city has lost 35,000 residents. Detroit officials acknowledge that they see little prospect for a population turnaround soon.

The Sweet Juniper blog pictures some of the empty homes : 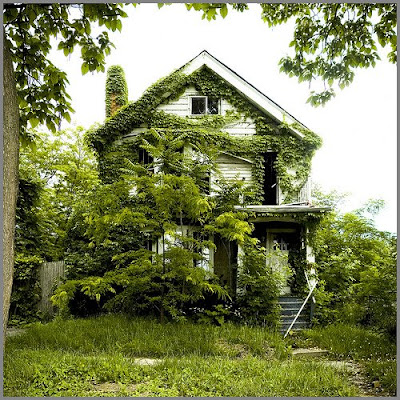 Can't see that happening in the former Motor City of Brum, no matter how far down the tubes it goes - this country's just too crowded. When we were over the water a couple of years back we saw abandoned houses outside Bakersfield (CA) and in Arizona - not to mention in Death Valley Junction, a place which has seen better days.

Insp Jenny Thompson, of Dewsbury police, described the attack on Mr Dyson as “nasty” and appealed for witnesses. She said she did not believe Savile Town was a ‘no-go’ area at night despite a number of unrelated incidents recently.

Sad in every sense - a young man killing himself on a bike he shouldn't have been riding, and the ensuing txtspk tributes/debate.
Posted by Laban at 7:09 pm

"She said the bus was attacked by youths who left prayers during Ramadan."

How does she know?

"This had been “dealt with by police working with community leaders” and Insp Thompson added: “There is no division in the community.” "

And we have always been at war with East Asia...

Can't see that happening in the former Motor City of Brum

No, because Birmingham was never a mono-sector like Detroit. There is much more variety. However you do see the decline in places like Corby, Barrow or mining villages, where the industrial raison d'etre has vanished.

Laban - I hope you don't mind (and if you do please accept my apologies and delete this comment), but I'd like to draw your readers' attention to Second Opinion, our second Theodore Dalrymple title, just out (and which I think some might enjoy). There's a free extract here for anyone interested.
Obviously, available at Amazon etc too.
Thanks
Dan Collins, Monday Books

Ah, those unrelated incidents, we do hear a lot about them. Funny, what with them all being unrelated to each other.

She said the bus was attacked by youths who left prayers during Ramadan.

"However you do see the decline in places like Corby, Barrow or mining villages"

Corby has grown a fair bit since the the closure of the steel plants.


As for Detroit one of the other things that has doomed the city is utterly poisonous race relations, the whites and middleclass blacks started leaving after the race riots and since then Detoit politicians play the race card a lot to cover up their incompetence and criminality.

See this article too: http://www.frumforum.com/to-kill-a-city

More attacks in Dewsbury; not racist of course