The death of the former "wheels and assemblies" MD, David Lanfear, seems a good time to note the decline and fall of another piece of Brit manufacturing.

Rubery Owen, which not so long ago employed 6,000 people in the heart of the Black Country, are still very much alive - in that post-industrial sense.

The last major manufacturing interest was sold in 1993 and since then the company has focussed its attention on 3 key strands – Property, Investment, and a number of independent operating subsidiaries. Yes, it’s smaller than it used to be in the late ‘60s and early ‘70’s, but it’s still innovating and it’s still active.

As we approach the 125th anniversary of the firms founding, we are investing heavily in our operating companies, and as the world faces different issues – climate change, social responsibility, the internet age etc – we hope that we are doing our bit to contribute, and see real opportunities to be at the forefront of the evolution of a new type of “British Industry” and “Industrial Revolution”.

"A new type of British Industry” denoting absence of same. As commenter Dearieme put it :

My wife made a new friend this year, the wife of a Visiting Scholar at Cambridge, a Chinese. After a few weeks here she had a good question. "I don't understand how this country is so rich", said she, "where are all your factories?"

Still, I'm grateful to the company for recording their history here and here.

The ‘70’s were a difficult period – with the early ‘70’s came fuel crises and fluctuating fortunes particularly due to smaller numbers of cars being produced in the UK at a time when production in both France and Germany was expanding significantly, and though there was the occasional ‘highlight’, by the late 70’s things were difficult again as a result of considerable rationalisation in the UK Aerospace industry and well as the Materials Handling/Forklift Truck sector, allied to the continuing difficulties and disruption in the UK Automotive Industry – The Group was significantly exposed to all of these sectors, and suffered as a result.

In 1981 the Company took the momentous decision to close its main Darlaston factory, with over 6000 jobs having been lost during the course of the previous 5 years, and from that point on the company took the decision that it would pursue a strategy of ‘orderly exit’ from its traditional manufacturing and engineering businesses – successful and growing manufacturing businesses were sold to organisations with access to larger amounts of capital and therefore better placed to drive their growth, whilst other operations were rationalised or even closed.

The story of RO can really be viewed as a microcosm of the change in British Industry between the late ‘60s and early 90’s – for a whole variety of reasons, what the company used to do is no longer done in this country anymore. Our fortunes, as a supplier of components and other assemblies under long term contracts to manufacturers of finished goods, were largely in the hands of others and in many ways our hands were tied. The lessons that we have learnt have been valuable ones, and the fact that we are still here is testament to that! Indeed, many of our contemporaries, business that used to do what we used to do, are no longer around and in many ways the fact that we are still in existence is as much of an achievement as the original growth and expansion of the business.

"Considerable rationalisation in the UK Aerospace industry" meaning goodbye to Blackburn, Handley Page, Bristol, A V Roe, English Electric, de Havilland, Hawker Siddeley, Tom Cobbley and all. Some bits survived in the form of British Aerospace. The adverts are from this wonderful archive of aviation engineering ads, a reminder of the infrastructure which is so essential to any hi-tech industry - the network of small, specialist-skill providers which grows organically round the major firms. I'd imagine that in China and Korea there are a host of such small firms servicing the computer industry - the motherboard and memory manufacturers etc. It's impossible to build those sort of skillsets quickly. Take a look at the list of engineering contractors and weep for a lost past - and a bleak future. 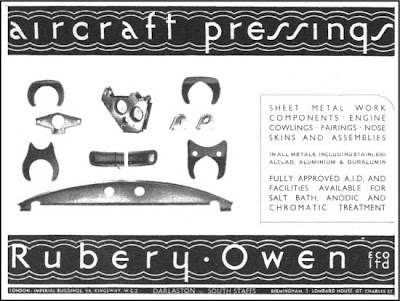 UPDATE - to any aged Midlander, it's like a memorial list. Sankeys of Wellington in Shropshire, later taken over by GKN, Birmal at Smethwick, Terry's in Redditch, where Laban spent a Seventies summer stamping out hose-bands, Jenks and Cattell, Birmetals in Quinton, Wilmot Breeden in Brum.
Posted by Laban at 10:44 am
Labels: history, the way we were

I doubt that old bitch Thatcher will be getting her state funeral.

It isn't too late to burn her alive actually

Yea but some of the former factories on the Tipton side of the Great Bridge to Dudley Port Road are being turned into nice flats though...

I knew it'd be tubes. Each Black Country town had a speciality product and Darlaston's was tubes. West Bromwich made springs (WB Albion grew out of Salter's company team), another town did chains, another did traps and so on. Check out the Titanic's anchor on its way from N.Hingley & Sons Ltd of Netherton to Dudley where's it's to be put on the train to take it onwards to Belfast.

I weep too. Within reason mind

Sarge - Im not letting Thatch off but credit where its due, the union boys did their bit to help all this along as well.

Was it better when we had

A. The London and Birmingham, Grand Junction, Liverpool and Manchester

There's an appeal in looking back to the pioneers in any industry but consolidation is nothing new and sometimes gives us something better.

It's notable that whereas our car industry plumbed the depths during both Labour and the Conservative eras, the German car industry managed to retain a sizable market share and reputation.

In my view the decline in engineering dates back to the 19th century. The newly rich married into the existing aristocracy who disdained trade. Thus in two generations they moved from wealth creators to consolidators to people who despised the means by which their wealth came. This theme comes up again and again when you read the history of British industry. Morris refusing to modernise production. CP Snows' two cultures is an extension of the same. Today the intelligentsia remains fundamentally anti-manufacturing across the spectrum. Ask someone of 18 to play the balloon game with Brunel and Jane Austin.

You understand the culture aspect Laban and write so well on it. It's a pity you attract morons like our Terence Stamp character.

Last anonymous - I completely agree. We have a rather strange, sneering attitude towards some of our greatest pioneers who gave us the platform to become what we once were.

That said, we must be sure to encourage new pioneers today, else the great days will certainly not come back.

And thank you, Laban, for reminding me how great the Black Country has been.

"In the 1970s, when I was developing the Ballbarrow, I needed some bent metal tubing. I got in my car and went to Birmingham. In the space of a few streets, I found workshops and suppliers who between them could provide the tubing, cut it, bend it and coat it. It was an extraordinarily vital environment. And it was absolutely essential to the small engineering entrepreneur.

You might ask what happened to these British suppliers and subcontractors? Quite simply: we drove them out of existence. Employment and property laws made it difficult for them to take on extra staff and premises. They needed a tax regime that appreciated the volatile nature of their business. Instead, Governments imposed PAYE and hammered them with high interest rates, year after year. By the mid-1980s, most had gone to the wall."

So it was negligent homicide rather than malice aforethought?

James Dyson gave a lecture at MIT on design innovation through the prism of his own career. Very inspiring if you're at an age to be inspired, or perhaps if you're deciding on a career to follow:

The Art of Engineering

Camborne will also have to take very unpopular decisions when they get into power, such as dismantling the Welfare State, but similarly, it was Labour who fucked Britain in the decade preceding, and they will be responding.

Apologies for the strong language but even for someone of my extensive vocabulary, there are times when even the word "fuck" only inadequately conveys my feelings.

"Camborne will also have to take very unpopular decisions when they get into power, such as dismantling the Welfare State"

That'll teach all those old age pensioners and NHS malingerers and other lower class oiks.

Why can't they follow the example of good housekeeping set by our wonderful financial sector?

I think if you go back to the late 1800's you can see the problems developing. The Germans even back then rewarded engineers and scientists. Meanwhile in Britain the clever people were seen to be those that entered law or became Doctors and bankers. I read a number of years ago that the number of lawyers in Japan relative to the US was something like 1:250 it's probably the same in the UK. When you have a culture that values parasites like lawyers above people that can create wealth, eventually you are doomed to failure. I think Douglas Adams in his Hitchhikers Guide to the Galaxy got it right with the ship full of hairdressers etc. that were abandoned by all the rest. I doubt we can change things now given the numbers of shyters in Parliament. Turkeys wont vote for Christmas. Oh and thnaks sgt troy for the laugh. Where have you been living for the past eleven years? The damage that Thatcher did relative to what ZaNuLabour have foisted on us is negligble.

"Oh and thnaks sgt troy for the laugh. Where have you been living for the past eleven years? "