Remember the Wroughton hammer attack, when the BBC reported that a person had been attacked with a hammer by some other persons ?

The trial has begun of the accused.

A gang battered a schoolboy to the brink of death with a claw hammer in a scene straight out of a Quentin Tarantino film, a court heard yesterday. Henry Webster, 16, was struck with such force that an imprint of the hammer was left on his skull, fracturing it in three places.

The 6ft 2in rugby player, who needed emergency surgery, still feels the effects of the "savage beating" by 16 Asian youths, Bristol Crown Court was told. Four teenagers - Wasif Khan, 18, Amjad Qazi, 19, and two boys aged 15 and 16, who cannot be named for legal reasons - deny charges of wounding with intent to cause grievous bodily harm. 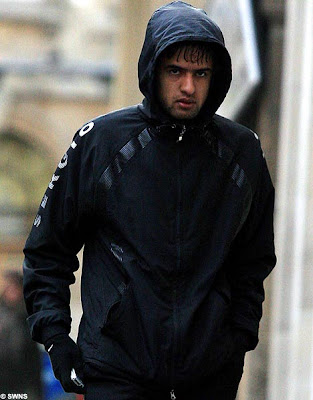 The court heard how a fight "blew out of nothing" in January last year, after Henry ran into a group of Asian boys in a corridor at Ridgeway School in Wroughton, Swindon. After a brief argument, he was asked to meet the 15-year- old defendant at the school tennis courts later that day.

Mr Patrick said: "It was to be a fair fight. A one- on- one - or so Henry thought. "But he had not reckoned on the fact it was not to be one-on-one - it was going to be significantly more."

The court heard how the defendant had texted or telephoned a group of friends from Swindon, who travelled to the 1,400-pupil school especially for the fight.

In a video interview filmed six days after the attack and shown to the jury yesterday, Henry told police he tried to walk away but the group ambushed him. "I stood around for a bit, then these men came through the gate and looked around," he said. "[The 15-year-old] was pointing at me and saying "He's the one, he's the one. A man in a black jacket pushed me and, as I walked away, he started punching me. I heard screams, then I was punched in the back of my head. I was curled up on the floor but they repeatedly kept hitting me. Then I felt the hammer hit the back of my head. I know it was a hammer because if it was a punch, your vision does not change. As I got hit, my vision turned to stars - it all separated, what I could see, because it was so powerful."

Witnesses to the assault saw his attackers run off, punching the air and shouting: "We've done it."

Doctors have told Henry he will never recover from the attack

Henry said: "The hammer had gone through my head, through my skull and into the fluid in my brain. I have been told I will never recover because the brain cells will not reform."

UPDATE - you'd never guess the line the defence are taking.

Schoolboy Henry Webster has denied claims that racist insults were made to the gang of Asian youths accused of battering him with a claw hammer ...

Facing questions from defence barristers at Bristol Crown Court, Henry, a former rugby prop forward, insisted there had been no racial tension with his alleged attackers. Referring to an exchange before the brutal attack took place, Robin Shellard, representing Qazi, said: "I am suggesting that it was shouted to the group - where are your P*** mates?' "Was that what you heard?"

A 16-year-old witness of the attack later described the moment one of the group pulled the claw hammer out of their sleeve.

The boy, who cannot be named, said: "I was just inside the tennis courts.

"One guy pulled the hammer out of his sleeve and just smacked him.

"As soon as he hit Henry, he fell to the ground. As he lay there bleeding, people kept kicking him.

"They eventually ran off. I was right next to Henry at this point and asked him if he was all right.

"All I remember next was the sound of a car screeching away."

Henry's head was struck with such force that a hammer indent had been left on his skull. Paramedics described his injuries as life-threatening.

The court heard that Henry had agreed to take part in a one-on-one brawl with another Ridgeway pupil after "barging" into a group of Asian boys in a corridor.

But a large group of Asian males travelled from Swindon to Wroughton for the fight, following a sequence of phone calls and text messages.

I suppose Mr Shellard is doing the obvious thing for his client. I'm just trying to imagine a defence solicitor trying that one if a large gang of white thugs had nearly killed a single Asian kid.

There's a video report at this BBC page, in which the reporter describes the attack by "a gang of men". The A-word, the M-word, and the R-word (except in the case of Henry Webster) are conspicuous by their absence.

There'll be a second trial of other defendants "to make it easier to manage".