Naught For Your Comfort

It's that time of year, when we look at the ONS Population Trends.

This year's figures (pdf) are for 2005 - 21% of births in England and Wales and 51% of births in London were to mothers themselves born outside the UK.

The figures come with some commentary. British understatement is not dead.

The increase continues the marked rise in this proportion seen over the last decade: the proportion of births to mothers born outside the United Kingdom has risen from 13 per cent in 1995 to 21 per cent in 2005.

The trend does seem to be upwards. 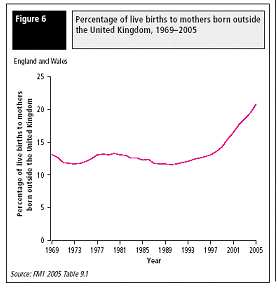 So it has. It's young 'uns having the babies. Plenty of time to have more.

There's stacks of stuff in the report (a fair bit about migration and ethnicity), much of it gloomy for anyone who believes, as I do, that importing large numbers of people while making no effort to integrate them (indeed, while not even being sure that there is an existing culture to integrate to) is likely to lead to a lack of what's currently called 'community cohesion', with possible adverse consquences ranging from the kind of thing we're seeing in Fiji at present to the kind of thing we saw in the 1947 Punjab.

The fertility rates for the last 100 years are interesting. You can see the great boom after WWI and WWII, then the Sixties baby boom. Then something happens - several things, actually. The Pill, abortion more or less on demand, and the 60s cultural revolution. Fertility (TFR) drops by about 40% between 1957 and 1977, the time my generation should have been having their babies. 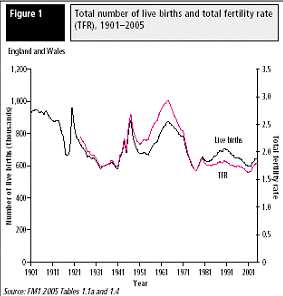 I was writing Christmas cards a few days back. While my circle of friends was probably more 'alternative' and 'radical' than most, and while a fair number have had kids, it's still sobering to contemplate such a number of intelligent, brave, creative women, now pushing 50, whose gifts and qualities will die with them.
Posted by Laban at 10:54 pm
Labels: demography

Isn't that what you all want?
Ever since women feminists started to want to be men it seemed that the equivalent of the 'decline and fall of the roman empire' was being happily carried out.
Ther government imported more taxpayers and you lot just fade away.

It is men who fear the consequences of children, especially with high divorce rates - 33% in Germany overall, 50%+ in the East.

The risks to men are enormous nowadays as divorce usually gives women custody and she wants custody to get more money.

There are reasons why marriage and children are unattractive to educated and well-paid men; and why immigrants funded by taxpayers can support large families on a low-standard of living and with low divorce costs if at all.

Our current fertility rate is no lower than the one we had in the inter-war period, but somehow we all managed to survive that.

The more crucial figure is the other one, showing that a growing proportion of newborns are born to foreign parents. I'm willing to bet good money most of these foreigners aren't French or Spanish.

Just how far its gone can be easily divined from the sorts of precautions my local council chose to take on its election leaflets. These were available in several languages, including Swahili, Urdu and Hindi. We are granting citizenship to people who can't even understand: 'Put cross next to one candidate' in English! A mid-forties acquaitance of mine, a lifelong Socialist, took one look at that and immediately put his vote next to the 'joke of a Party', as they are referred to around here.

In the private residential community where I live, I have Swiss-born neighbour next door, and a French-born neighbour just above. Both are indistinguishable from your typical Brit. They certainly don't need their election material translated into French. By the way, they are also planning to vote BNP now.

we had in the inter-war period

OT - remember that Sikh boy in Edinburgh who said he was attacked by racist thugs who cut off his hair, which the BBC deemed to be a headline news story?

Turns out he was lying:

(At least the BBC reported the lie).

Do these figures include births to mothers whoose parent or parents were born outside the UK?

Ive taken to boring my female friends in the 40ish age bracket about how they need to have children now, before its too late.

Its true though that our decling birthrate wouldnt matter if we werent importing our own destruction.

The lean thirties are a bit of a myth. The depression was far more localised, and less deleterious for the thrifty people of the time, than some hoorah-for-the-present historians would have you believe. Read up on Chamberlain, and how he was lionised after his performance as Chancellor, to get a good overview of the period.

Anarchic, unstable France, with its three-a-farthing governments and constant uncertainty, was another matter entirely.

Laban, thanks for yet another thought provoking post. I hope you have a great Christmas and I wish you all the best for 2007.

Merry Yule, Christmas or whatever to you Laban.

Something better change... and you help. :D

Indeed, merry Christmas, Laban and everyone else.

I heard the bells on Christmas day
Their old familiar carols play,
And wild and sweet the words repeat
Of peace on earth, good will to men.

And thought how, as the day had come,
The belfries of all Christendom
Had rolled along the unbroken song
Of peace on earth, good will to men.

Till ringing, singing on its way
The world revolved from night to day,
A voice, a chime, a chant sublime
Of peace on earth, good will to men.

Then pealed the bells more loud and deep:
“God is not dead, nor doth He sleep;
The wrong shall fail, the right prevail
With peace on earth, good will to men.”

The lean thirties are a bit of a myth. The depression was far more localised, and less deleterious for the thrifty people of the time

I know the Economic History of Great Britain very well, I know also what happened in 1921 and how 40% British Govt Spending was Debt Repayment...........I know very well how the Household Means Test worked. I know very well how people lived on the London Circular and how they lived in Sunderland, Blackburn, Bradford, Leeds, Rotherham etc.

I know what physical condition recruits to the British Army were in following conscription in 1939.

In fact it is with such detailed knowledge of the era that I made my comment at 12.01pm.

and less deleterious for the thrifty people of the time,

You've missed the point. A period of u/e is less damaging for those who have put a little to the side. We're talking micro-economics here, not macro-.

By the way, how has Singapore managed to avoid the consequences of this fabled paradox, despite not only not discouraging private saving, but even making them mandatory? (Growth rates ~5% per annum, inflation ~2%, u/e ~3%. Euro living standards. Boy, quite a few staunchly Keynesian gov'ts would give their left arms for a record like that.)

Yes but Singapore must have a demand for that savings pool though it seems not since they bought BAA Plc suggesting a lack of investment opportunities.

Being an entrepot centre and heavily weighted towards financial services it is hardly comparable to a major industrial country where inventories are a key factor in the trade cycle.

Forced Savings is a policy option, but since the key major items of expenditure - homes and cars - are beyond the reach of most Singaporeans its economy is necessarily less complex - a bit like Jersey really

I feel that Singapore (and HK once) are not really good examples for whole countries, being really just city states. In the words of Dr Evil; I cant really back that up. Its just a gut feeling.

I reckon this family ought to be in line for some kind of vaguely sinister-sounding "heroes of England" award. Twelve kids, married, employed.

Lurker ofcourse Singapore and HK are not real countries they are trading posts living off globalised economics and before that they were staging posts for the British Empire.
If there was some kind world wide economic melt down those 'countries' would be in serious shit.
I know others countries would be in trouble too but not as much.

First of all, on my first visit to UK Commentators, I must congratulate the contributors on their intellects and intelligence, as demonstrated by well-written and well-considered comments.
With reference to the comments on Singapore (Alex Zeka, Voyager, Anonymous, Brituncula and Dave), when I worked there from 1968 to 1971 it was a third world country with a population of just 2 million, half of whom were aged under 21. By 1971 it had a dynamic economy, and I invested money there. The compulsory savings were vested in the Central Provident Fund. It was introduced, ironically, by a British colonial government on 1st July 1955. I used to know it's General Manager, Charles Green, from 1968 to 1971. We were in the Singapore Motor Club together. It's a pity we in the UK never been able or motivated to afford a similar system. Before the credit crunch the CPF had assets worth $US1 trillion. It raises a substantial levy on all employment, mainly to provide for pensions, but employees can also borrow from their credits for healthcare and modest proportions for further education and house purchase. An important aspect is that there is no element of redistribution. Those who earn the most can recover the most, usually later in life. Nowadays the population has doubled to around 4 million citizens plus another 1 million "guest workers" who are allowed in because they have special skills or capital to offer. And all this is in a territory about the size of the Isle of Wight, plus about 25% which is land reclaimed from the sea. The standard of living is higher than in the UK.
The CPF is much better that our Pay-as-you-go debt-based system of old age care. Further details can be found at: http://www.vandine.com/cpfpaper.htm