In another life, I always enjoyed the arrival at Stonehenge Festival of the tribes of the Planet Gong, easily recognisable by the Flying Teapot flags on their tents. They were always nice people - and their girls ! I guess I was just a sucker for a slender young thing in a cheesecloth skirt and hand-crafted woollens. Not to mention the girl with the magic teapot, who wore nowt but necklace and spacy smile. Honi soit qui mal y pense.

So I'm sorry to hear that the cult of the Giant Teapot is in trouble. 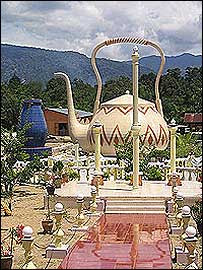 They were arrested for possessing documents contrary to Islam, according to an official in Terengganu state.

The Sky Kingdom is an inter-faith sect which claims to promote harmony between all of Malaysia's religious groups.

Known as much for building a giant teapot structure as for its teachings, the group has often been criticised for luring adherents away from Islam.

The Sky Kingdom is led by the eccentric Ayah Pin, who claims he is the saviour of the world.

The group's controversial structures - which given it the nickname "teapot cult" - are said to combine architectural elements from Islam, Christianity, Hinduism and Buddhism.

The teapot is thought to signify the purity of water, while the umbrella signifies God, who shelters everyone in the world.

As I might have said in 1975, the Sky Kingdom people sound 'really nice'. Man.

PS - and while we're on disreputable youth, Dom has more cautionary tales from that era.

UPDATE - more on Ayah Pin from this fine Malaysian site.
Posted by Laban at 7:06 pm