The Glenturret Distillery is looking for a replacement for the departed Towser, who killed 30,000 mice in single combat over a 24-year career. 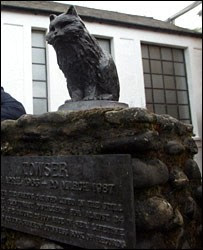 "The story goes that Towser's incredible mousing prowess was the result of a tiny nip being added to his milk each night, but we don't have any scientific proof to back this up and we certainly wouldn't advise this to anyone whose cat is under-performing in terms of vermin control".

In a press release, the Mouse Liberation Front described Towser as 'a mass murderer' and said 'we had hoped to see him stand trial at the International Criminal Court, along with the inventor of the 'humane' mousetrap. You know, the one that starves mice to death slowly, like Terri Schiavo'.

Glengarry-tip - Freedom and Whisky
Posted by Laban at 8:14 pm

This is natural behavior for a cat.
If Towser had been feral, she would still be well-fed due to her hunting ability. The grain at the distillery was very attractive to mice and rats, too dumb to learn that there is a predator in the building.