Chippy McNeish, the carpenter on the James Caird, the lifeboat which carried the men of Shackleton's expedition 800 miles to South Georgia, is to have a bronze sculpture of his beloved tabby cat erected on his grave. Shackleton ordered the shooting of the cat along with the sledge dogs, after their expedition ship, the Endurance, was crushed by ice and the expedition marooned with little food. 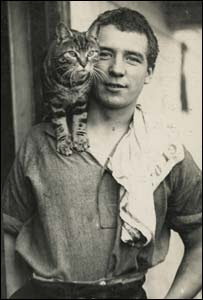 Without McNeish's skilful adaptation of the boat for its voyage, the expedition would have been lost. But for questioning Shackleton's authority after the loss of the Endurance, McNeish lost the confidence of his leader, and was not awarded the Polar Medal despite his contribution to the saving of 29 lives. McNeish died in poverty in 1930.


Another feat of exploration was announced today - the first privately owned spaceship flight. Burt Rutan, who designed the first aircraft to fly non-stop round the world, is an engineering genius.
Posted by Laban at 9:34 pm
Labels: adventurers