I never fail to be amazed at our punitive criminal justice system. Just because you beat someone to death in an unprovoked attack doesn't mean you should necessarily go to jail, does it ? Especially when you were only fifteen at the time. A fine, probation or community service should surely be sufficient. 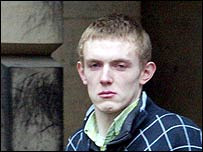 Yet when social workers included these in a range of suggested sentencing options, fuddy-duddy old High Court judge Lord Hardie spat the dummy.

"He said that for a social worker to consider the options of fines, community service or probation was absurd.
The only sentence available for murder, he insisted, was life imprisonment."

To think we pay taxes for a judge like that when we could spend the money on social workers !
Posted by Laban at 10:14 pm
Labels: Scotland